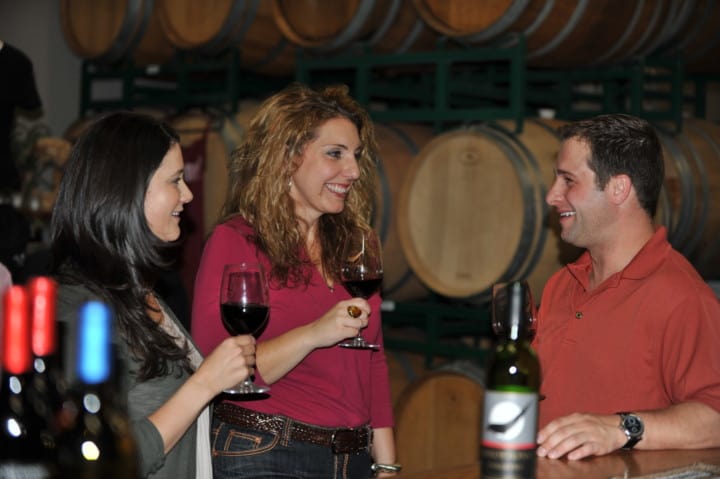 Wondering if there is gluten in wine? Here are the answers.

OK, so if there was anyone uniquely positioned to be the authority on gluten-free wine, I guess it would be me. (If you already know that I'm a fifth-generation winegrape grower that ran a vintner's association, welcome back!  If not, Hi There! I'm KC, the Founder of G-Free Foodie.)

I wrote a post about Gluten-Free Vodka, and in it I stated that I am not worried about gluten in wine, and I don't think you should be, either.  Oh, the emails!  So, here's the info I've used, along with real-world-in-several-wineries-experience, to assert that Wine is Gluten-Free.

It should be noted that all U.S. gluten-free governing and advocacy bodies, including Beyond Celiac, Celiac Disease Foundation + Center for Celiac Disease Research have ruled that wine is gluten-free, plus the FDA.

You read it, you decide: it's your health, after all.

*Before We Begin: wine drinks are not WINE

I am not talking about Wine Drinks, Wine Coolers, Flavored Wines or other beverages that get all loose with the definition of wine. If the beverage you're drinking contains anything other than 100% real wine, you're playing White-Russian Roulette & will probably get dosed.  If you want a wine drink, make sangria or a spritzer, it's easy, delicious & safe.

- Wine is made from 100% grapes (or in some cases, other fruit, like pomegranates), that's it, that's all.  Grapes and yeast in barrels or tanks.  No grains of any kind.

- In almost every case, wine is gluten-free to well below 20 parts per million. The only exception to this is wine-based beverages, like those mentioned above.

Wait a minute here,  I read an article about wheat paste used in wine barrels. What about that?

To quote my previous statement on this issue: Barrel paste VERY rarely contains wheat anymore – that was a mostly European practice. (I can’t say never, because some obscure story will pop up, but I want to.) Further, the paste rarely touched the wine, and in the case that it did, the extended fermentation period would kill all traces of the gluten protein. Also, glutenfreewatchdog.com ran a series of tests on wine stored in barrels sealed with wheat paste and found the wine to be safe.

So – I’m not worried about it, and I don’t think you should be either. If you want to be super-safe, drink domestic wines or those that are tank fermented. (In tank fermentation, the wine is made in stainless steel tanks. Oak planks called "staves" are sometimes put in the tanks to add oak flavors.)

I also read that gluten is used to filter wine!  How about that?

Yeah, that's a good question.  The answer is: they don't use gluten to filter wine.

Some winemakers do, however, use products made from other allergens, including: micronized potassium casseinate (that's casein, for you GFCF folks), skim milk powder (rarely), gelatin, egg whites or egg albumin, and isinglass (from fish.) There are lots of other filtering and fining agents too, most of them more popular than those I just listed, so not all wines come into contact with allergens.

But I drank some wine and I feel gross.  Why?

Well, did you drink too much? I know, I know, that's too obvious. So let's talk about why you might be feeling icky.

1 - I listed several filtering agents above.  If you have a problem with any of those, that could be the reason.

2 - Sulfites. Guess what? Sulfites are naturally occurring in wine (although more are usually added) and most wines contain LESS than 10 times the amount of sulfites in dried fruits.  However, if you are sensitive to sulfa, or you drank the wine while eating a bunch of dried apricots or sun-dried tomatoes, it could be the culprit. The best sulfur-free wines I've tried are from Frey Vineyards in Mendocino.

3- You have severe asthma. Those who have serious breathing problems may have trouble metabolizing sulfites, but don't have a true sulfa allergy.

4 - If red wines seem to bother you more than white wines, you may be sensitive to the tannins in the wine.  Try reds with lower tannin levels instead.

Of course, I can't go without mentioning Birdstone Winery, the folks that hosted our first G-Free Foodie Eat Well Event.  Their Dolcetto & Primitivo are two of my favorite red wines, and the Dolcetto is low in tannins.

Hope that helps - See you in the Tasting Room!

Vineyards vs. Wineries: a Crash Course

While we're on this topic, let me clarify something: a vineyard is where they GROW the grapes, a winery is where they make the wine. Some companies do grow the fruit and make the wine, sometimes they even do it all in one place. In that case, the wine is an "estate" wine. But owning a vineyard doesn't make somebody a winemaker anymore than owning a cattle ranch makes them the chef in a steakhouse. Certainly the quality of the fruit matters, it matters immensely, but so does the quality of the steak.

A Word About Closures:

Cork itself does not contain gluten - it's a natural material grown on cork trees, the rubbery substance in cork in called Suberin, which occurs in the plant. Synthetic corks are made from plastics. Other bottle-top closures include Vino-Seal style t-tops (plastic), glass t-tops, screw caps (metal & plastic), ZORKs (metal and plastic), and other plastic options. Of course there are bag-in-the-box and large scale restaurant wine dispensing equipment, which are also safe.