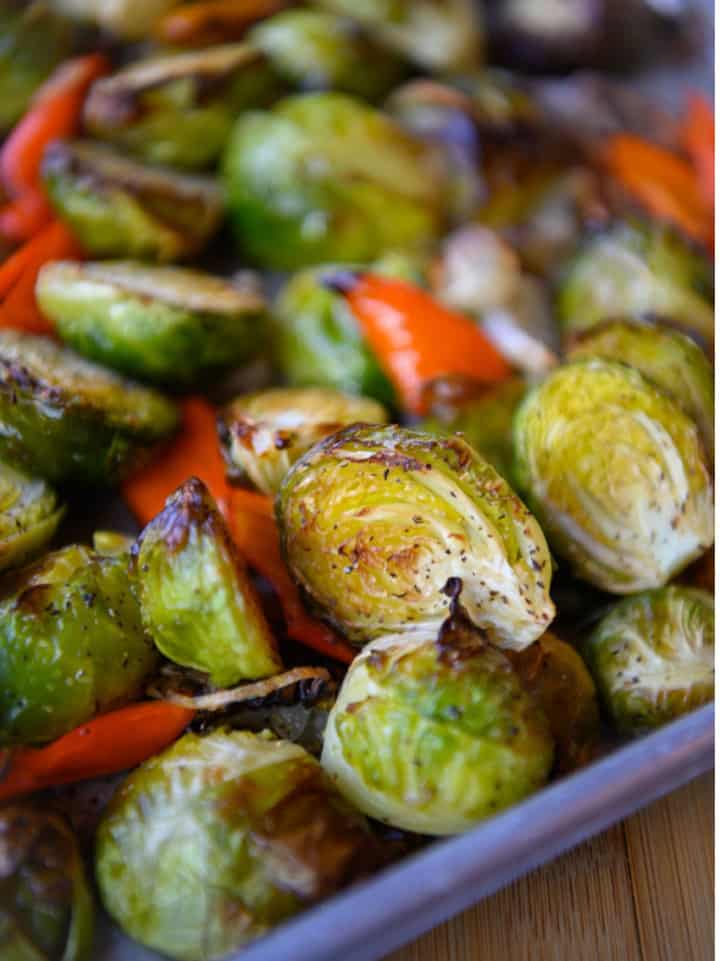 An easy side dish with tons of color and flavor!

These Roasted Brussels Sprouts with Red Peppers and Shallots are as delicious as they are colorful, and incredibly simple to make.

There seem to be two very different camps of people: people who LOVE Brussels Sprouts, and people who just don’t. Call me crazy, but I really think that people who don’t like Brussels Sprouts probably haven’t had them prepared the right way (or with bacon). I mean, if you’ve only had boiled Brussels Sprouts served without enough salt, you need to give them another shot.

I mean, unsalted boiled Brussels even sound gross to me, and I love Brussels Sprouts.

That's where roasting comes in.

Roasted Brussels Sprouts have a crisp, toasted outside and a soft interior. Roasting at a high heat caramelizes the exterior and adds all kinds of delicious brown goodness.

It does the same for the shallots and pepper, which both add flavor and sweetness to the final dish. After I've roasted the veggies, I stir them around a bit on the sheet pan, so I don't miss out on any good flavor bits.

That's why it's also important to use a high quality olive oil - it's holding all those "flavor bits' and can make or break the entire dish. I get my EVOO direct from the olive grower by the gallon - it's fresher and cheaper that way if you use a lot.

- Use enough oil to give the vegetables a light coating. It helps the salt & pepper stick, helps the veggies to keep from sticking, and aids in browning.

- Don't crowd the pan. Attempting to roast more than a single layer will result in steamed Brussels Sprouts, not roasted ones.

- Don't stop early! A few extra minutes in the oven can make all the difference in caramelizing.

- Give 'em a stir or a shake. When I roasted Brussels Sprouts by themselves, or with bacon or garlic, I usually don't stir them. This recipe needs a bit of movement, or the peppers could burn. 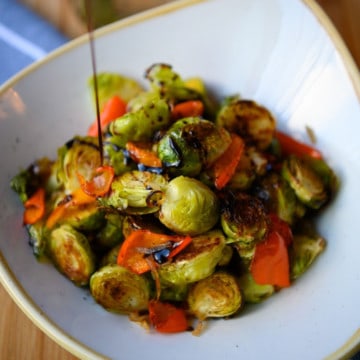 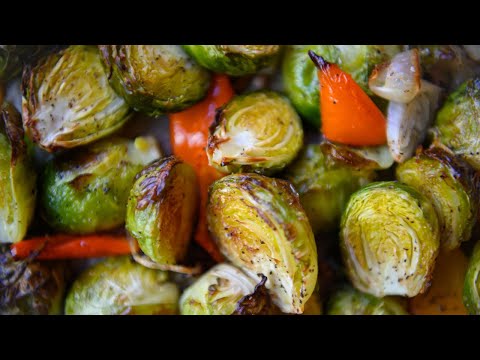 Kick up your side dish game, friends.

What kind of oil should I use to roast Brussels Sprouts?

I use a high quality extra virgin olive oil. You can also use coconut oil, or any good quality neutral oil that can withstand 450F well.

Do I have to cut the Brussels Sprouts in half before cooking?

If you want the super-brown tasty bits, yes. You can roast whole Brussels Sprouts with this method too if you aren't worried about maximum caramelization (or you just want to make prep easier) - add 5 minutes of roasting time for smaller sprouts and 8-10 minutes for larger ones.

Do you need to soak brussel sprouts before cooking?

No! Unless the sprouts are full of mud, a quick rinse before you trim the Brussels is just fine.

How do you roast Brussel Sprouts without burning them?

This roast + stir method takes out the guess work - just be sure to keep an eye on the sprouts for the last 5 minutes of cooking.

Why are my roasted Brussel Sprouts mushy?

There are three reasons roasted Brussels Sprouts get mushy:
- Leaving water on the veggies before cooking, causing them to steam instead of roast
- Crowding the pan. If you add too many sprouts to the pan, there's no room for the hot air to move around. If you can't see bits of the sheet pan between the veggies or they aren't in one layer, use two pans.
- Low heat or not enough roasting time. If you pull out the sprouts too early, they won't have time to carmelize. If the oven is below 375F, they vegetables are essentially baking instead of roasted + browned.

This salad is loaded with flavor and goodness: shaved Brussels Sprouts, chopped kale, garlic, shallots, pumpkins seeds, grated Pecorino cheese and a tasty & easy dressing. You can even make it in advance, because the leafy greens hold up!

It's the perfect salad for meal prep - and holidays!