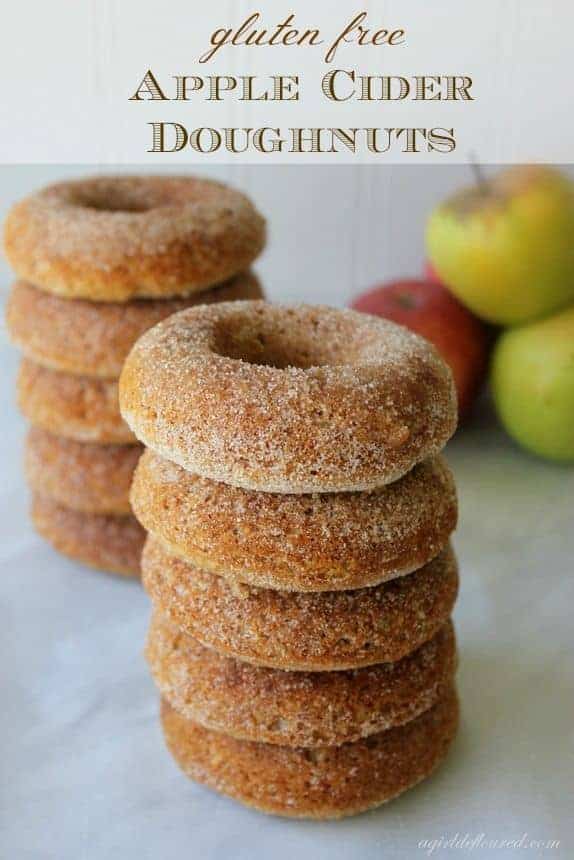 Gluten-Free Apple Cider Doughnuts are loaded with cinnamon-sugar deliciousness and all the flavors of Fall.

Gluten-Free Apple Cider Doughnuts are loaded with cinnamon-sugar deliciousness and all the flavors of Fall.

In my life BGF (Before Gluten-Free), some of my favorite things to eat in the whole, wide world, were hot cider doughnuts sprinkled with cinnamon and sugar. They are most often served at apple orchards and county fairs, fresh from the fryer, and passed through take-out windows in greasy paper sacks. I prefer the small doughnuts best, eaten in one or two delicious bites, leaving only a trace of sugar on the fingers. 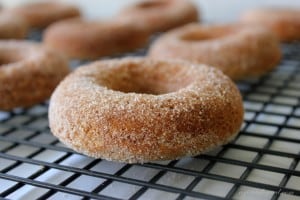 Cider doughnuts are, arguably, the most autumnal treat of all, especially when coupled with a visit to an apple orchard, a hayride, and a hot cup of something. Nowadays, I prefer my doughnuts baked instead of fried, and my gluten-free status has all but eliminated my ability to buy them fresh from the apple farm. So I make them at home, natch, thanks to a fantastic recipe by my friends Pete and Kelli Bronski from No Gluten, No Problem.

My favorite apple cider to use in this recipes isn’t really called cider at all–rather it’s the dark brown, unfiltered apple juice found in the refrigerated section of Trader Joe’s, but any unfiltered cider will do. When reduced, like all liquids, it becomes much thicker, richer an deeper in flavor. Cider syrup can be used to top ice cream (or to make it), poured over pancakes or waffles, stirred into cocktails or used as an ingredient in baked goods. The longer it simmers, the thicker it gets…until it eventually turns into sticky caramelized candy (that will pull out your teeth for sure). For this recipe two cups of cider is simmered until it reduces to ½ a cup.  Watch it carefully! I suggest making twice as much cider reduction than the recipe calls for…because you never know when you’ll need the leftovers.

Try these Apple Cider Doughnuts with a mug of Hot Chocolate or a Pumpkin Spice Cocktail.