my journey back to health - and becoming the G-Free Foodie

{originally posted 2013} I recently read this post by Shauna Ahern, The Gluten Free Girl and a similar one by my friend Mary Fran of  Even Curiouser (formerly Frannycakes). If you're living with Celiac, trying to understand someone who is (yourself even) or just more about humanity, I encourage you to read both posts.

It occurred to me: what if I told my truth? Or, at least, the story of the lies I was telling myself? Could that help someone? Maybe. Here we go.

I've spent the last two decades of my life throwing up. In high school, it was 2-3 times a week, attributed to stress & a weak stomach. My weight fluctuated (mostly up) and stomach cramps were normal. I used to fall asleep in the bathtub regularly - largely because being immersed in warm water would relieve the pain in my gut.

In 1996, I flew, by myself, to San Diego to have gastric bypass surgery. There were a number of complications and I was scared as hell, but equally scared about ending up like my parents, both of whom were morbidly obese. Almost immediately, the vomiting went from 2-3 times a week to 2-3 times a day, often more. No matter what I tried, I was sick. Everyday.

I started taking medication to quell the nausea (almost no help), and my friends started carrying bottled water & gum in their cars for me. I'd say pull over so I could jump out of the car & puke, I'd rinse my mouth and we'd keep going. It was the new normal.

Once, while I was throwing up, I heard my dad ask my mom: "what did we let her do to herself?" Frightened that I was upsetting him, and that he wouldn't consider bypass surgery, I taught myself to vomit silently.  Within that year, my parents both had bypass surgery. Without it, I'm confident I'd have lost at least one of them by now, possibly both.

I began to have additional GI problems, and a cast of doctors ran a litany of tests on me, prescribing medications as they went. None of it helped, I continued to be sick, now fighting a host of other issues as well. The upside, if there is one, is that if any of my friends need medical testing, they can call me for a real-life description and questions to ask, because I've usually experienced it at least once.

Your teens & twenties are hard enough without vomiting profusely, inexplicable weight fluctuations & skin conditions caused by GI flares - so although I was often the life of the party, surrounded by friends and seeing the world, I fought depression constantly. (Serotonin, the chemical responsible for regulating our moods, is made in the small intestine, and malabsorption can also cause depression. In short, if your GI system is a mess, your mind can be, too.)

With my health worsening (plus a bona-fide, movie-quality stalker & a number of other issues that better qualified me to be a guest on Jerry Springer than the Little Lebowski Urban Achiever that was expected of me) I became convinced that I would die in my early twenties. Not by my own hand, necessarily, but simply because no human body could possibly be this sick all the time and sustain life. I knew I couldn't. When I woke up on my 23rd Birthday, I was genuinely surprised.

I felt ashamed, unattractive, disgusting even. I told myself that my friends tolerated all the gross parts about me because they loved the pieces of me that are funny, intelligent and strong. I allowed several people to treat me like hell because I felt like hell.

Multiple reparative surgeries occurred. I was still sick, my abdomen covered with scars.

I'd love to tell you that it all went away the minute I was diagnosed with Celiac & went Gluten Free. The vomiting did, and the rest of my GI issues got better over time, although I still struggle with ulcerative colitis, occasional nausea and my system will likely never function normally.  But the piece in my head - the one telling me I was gross, that I had to be tolerated, that I was unacceptable - that one stuck around for awhile.

Once my body was on the road to healthy, I began to address the rest of my life. I repaired some relationships, I buried others. I replaced the toxic people in my life with some incredible new friends. I hit up some therapy & hot yoga (consider this a recommendation of both). I got back in the kitchen. Life was better, but self-doubt still gnawed at me.

I made Winehead go with me to yoga one day, and she said she wished her abs looked like mine. I looked at her like she was insane, and then I realized: maybe I was doing it to myself. If she wasn't disgusted by my scars or my weight, maybe no one else was. When I shared these thoughts with her & a few trusted friends, I understood how wrong I'd been. It was time to take myself on and change my own mind.

I immediately thought of Janet Jackson on the cover of Rolling Stone (Google it). It's one of my favorite images of all time. The moment I saw that cover I was stricken by how beautiful she looked, and I also immediately told myself I could never take a photo like that, since it showed her abdomen fully.

What if I stood for the camera, scars showing, stomach out, and made something beautiful out of something I've told myself was ugly for so long? I almost had a panic attack just from having the thought. When I found the courage to discuss the idea with James (my friend + photog) and Winehead, I expected them to tell me I was nuts. Instead, James found a date on the calendar & Winehead offered to hold my boobs (she's a team player.) We recruited one more hand model & a couple of other friends heard the plan and cheered me on.

The day of the shoot, I was so nervous I could barely breathe. I had big plans of spray tans & double workouts in the days prior, but Sam got the chicken pox instead. So there I was, looking the way I always look, 20 pounds heavier than I'd been 6 months earlier. Listening to Vanilla Ice would have been the only way I could have felt any less "Ms. Jackson if you're nasty" - thankfully James turned on the Alabama Shakes. 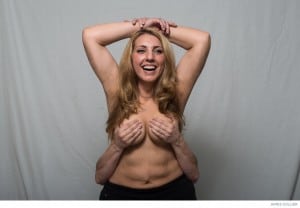 Once we starting shooting, I couldn't look at the pictures. Actually, I didn't really look at them until days later. It was a tough night, I felt very raw and exposed (go figure.) But I spent most of that evening like I spend most of my life: surrounded by friends, while we joke, laugh & take turns holding each other up. It's just what we do.

I love these pictures, not just because I've learned to love myself more, but because of the path & the story they represent.

Wishing you all the best on your path - and yes, I listen to Moby.

Photo Credit: James Collier. but you knew that.