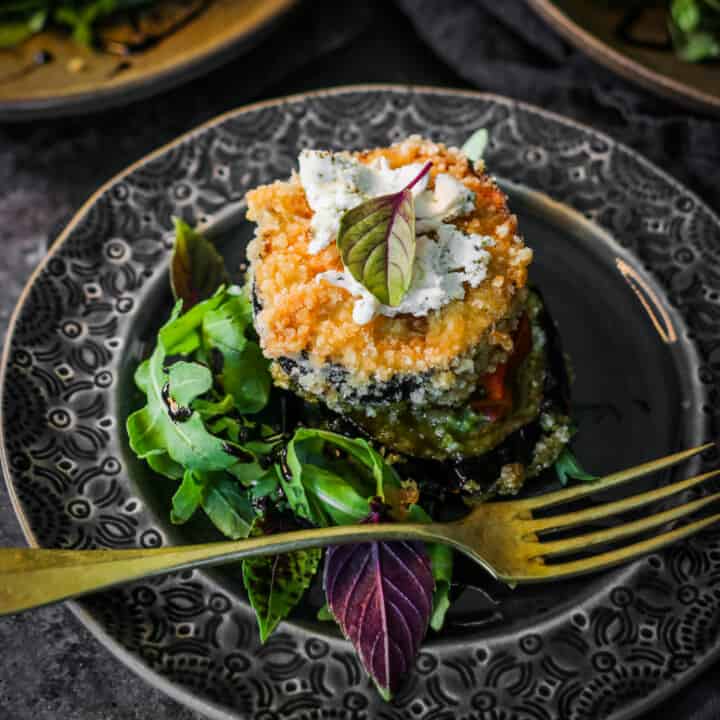 The trick to evenly cooked fried eggplant is this soak + salt method.

Main DishesRecipes & Techniques by Cooks We LoveThis Is SO GOOD.Tips & Tricks

Not everyone loves eggplants as much as I do, but this Fried Eggplant recipe is so perfect that even if you don't dig eggplants, you could become an eggplant lover! The best fried eggplant that you've ever tasted is featured in this Eggplant Napoleon. This recipe is a restaurant version you can make at home.

We make this fried eggplant and the Eggplant Napoleon gluten-free, but you can 100% use conventional flour with perfect results. If you don't want to make the full Napoleon recipe, just use the method for frying eggplant and do what you want with it!

What is Eggplant Napoleon?

Honestly, Napoleon is just fancy name for a layered dish.

Eggplant Napoleon is a simple, beautiful vegetarian dish full of nutritious, cheesy flavor and easy to prepare. Pan-fried eggplant slices layered with basil, tomato, and mozzarella cheese before being baked to perfection.

How is this fried eggplant recipe different from others?

Between the soaking method and breading technique- this fried eggplant recipe is unbeatable! It probably has a step or two more than you're used to - but this chef-perfected method is next-level.

It has the just the right amount of crispness that pairs perfectly with the herbed goat cheese,  roasted tomatoes, and homemade pesto in our Napoleon recipe. It's also fabulous for Eggplant Parmesan, eggplant fries and more.

Why do you soak and salt eggplant before frying?

You can remove the bitterness from your eggplant by salting and soaking it before cooking.

Excess moisture and some bitterness are removed by salting your eggplant. Today's eggplants are produced for mildness, so it's not as vital as it was. If you salt eggplant before frying it, it will have a creamy texture and a rich flavor.

Don’t worry about your eggplant being overly salted when you eat it, you will wash most of the salt off before frying it.

Choose the freshest eggplants you can find and utilize them within a week after buying them. Instead of dull and wrinkled eggplants, go for glossy, plump ones.

Some say that size doesn’t matter, but with eggplants, it does. Smaller is also better because larger ones are more mature and can be bitter.

The best way to eat an eggplant is to eat it fresh. Pick them the day you plan to cook them if you have a garden.

This method for frying eggplant and the original (gluten-full) version of this Eggplant Napoleon recipe is from Chef Vatche Moukhtarian of Cracked Pepper in Fresno. We perfected it for the home cook. Once you taste it, we know you'll love frying eggplant this way too. 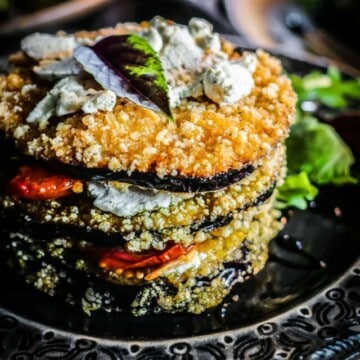 KC Cornwell
The best fried eggplant that you have ever tasted is featured in this Eggplant Napoleon! This recipe is is a restaurant version you can make at home.
5 from 3 votes
Print Recipe Pin Recipe
Prep Time 20 mins
Cook Time 35 mins
Soaking time 1 hr
Course Main Course
Cuisine Italian
Servings 3 servings
Calories 840 kcal

For the Fried Eggplant:

Original recipe provided by Vatche Moukhtarian, Cracked Pepper Bistro to Taste Fresno Remaining pesto can be stored in a sealed container in the refrigerator for up to one week.

Love this eggplant recipe and want to try out more? Check out some of my other favorites!

Fresh Mozzarella, Figs, Leeks, and Tomatoes in a Pizza-Style Baked Eggplant Recipe What's not to like about that?

This eggplant bacon is fantastic in BLTs, and it's also delicious sliced up and sprinkled over cooked greens!

To make this dish memorable, stack as high as you like and put anything you want in between. We piled pieces of broiled green tomatoes seasoned with olive oil, salt, and pepper this time. My favorite version is layered with slow-roasted Caprese tomatoes and grilled till slightly browned! Yum!

Do you peel eggplant before frying?


Nope, keep the skin on; it is entirely edible. However, it might be tough on larger eggplants. If your eggplant is smaller, you should leave the nutrient-rich peel on that bad boy.

How do you cut eggplant for frying?


Yes, fried eggplant can be frozen. It can last up to 3-4 months in the freezer.

After frying the eggplant and letting it cool, store it in an airtight container or zip lock bag in the freezer.

Are eggplants fruits or vegetables?


Due to the way they grow, eggplants are considered fruits. Fruits are seeds that emerge from a plant's blossom, whereas vegetables are any other component of the plant, such as roots, stems, or leaves. The nightshade family includes eggplants.

Is fried eggplant good for you?


Most people associate the "fried" part with being unhealthy.

Eggplants are nutrient-dense fruit containing many vitamins and minerals that can help with everything from migraines to depression.  Eggplant is high in fiber, which is good for your heart and digestion and keeps you fuller for longer.

You can try out oven-fried eggplant if you want a healthier option, but it won't be the same.

What is the best gluten-free flour for frying?

King Arthur Measure for Measure or Pamela’s Gluten-Free Artisan Blend blend both make light, fluffy gluten-free fried batter or coating. If you're making your own blend, use gum free baking binder instead of xanthan or guar gum.