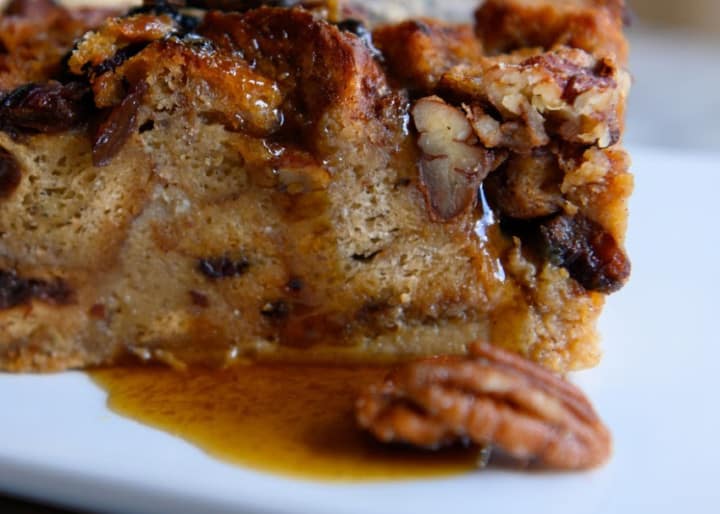 This is the reason gluten-free raisin bread was invented.

Cinnamon Raisin Bread Pudding with Brown Sugar Bourbon Sauce, entirely gluten-free. It's breakfast-meets-dessert in the best possible way.  This bread pudding would be equally good with vanilla ice cream at 7PM or a platter of Oven Baked Bacon in the morning.

And the sauce. THE SAUCE, you guys. I'd just about put that Brown Sugar Bourbon Sauce on a 2x4 and eat it.

As far as I am concerned, this is the best way to eat raisin bread. Except for the Raisin Grower's Sandwich at The Vineyard, which is sadly not gluten-free. (There's a bunch of delicious GF stuff there. Just not the sandwich, which is a toasted ham & Swiss & American on raisin bread.) So I'm only remembering the sandwich from my pre-gluten-free childhood.

About my raisin choices:

I am, as you may know, slightly picky about raisins because I grew up in a family that grows them. On that note, I will tell you with certainty that vine-dried raisins are significantly better than their ground-dried counterparts. So, I only like them in certain recipes, and I don't want them overcooked, and I don't like them when they are too old, and... I bet I was a pain-in-the-ass as a kid.

So - when I tell you this is my favorite way to eat raisin bread, understand that it comes with a years-of-experience endorsement.

I like the bread pudding topped with a bit of the sauce, with a cup of coffee or black tea. You can also top it with some fresh whipped cream, or a sugared vanilla bean. Don't be afraid to make it from company. It's really delicious.

About the Raisin Bread:

I usually pick up the Canyon Bakehouse  or Trader Joe's gluten-free raisin bread, because that's what I can find. Sometimes I bake two loaves from scratch (one for eating, one for bread pudding!)  I also pick it up at gluten-free bakeries when I can find it. Use whatever works for you, as long as it is a soft bread. (Read: not Udi's.)

You can make this with plain sandwich bread instead of raisin bread too. Just double the cinnamon and add a few more raisins if you'd like.

About the Brown Sugar Bourbon Sauce:

Yes, the sauce is optional, but I don't think you should skip it! It really makes the dish. If you don't want to use bourbon because of alcohol issues or you don;t like the taste, reduce the brown sugar to ⅓ cup and swap the bourbon for orange juice. If you're worried about gluten in bourbon - don't. Distilled spirits are gluten-free.

OK, get baking! If you love bread pudding, you should try this Overnight Lemon-Glazed French Toast Bake too. If you're a cinnamon bread fan, check out this vegan Cinnamon Swirl Bread - you can even add raisins! 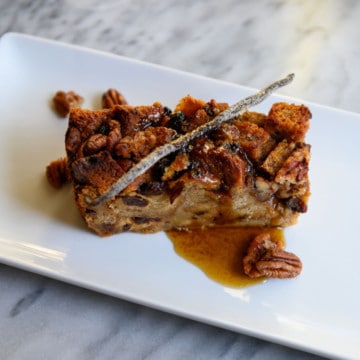 For the (optional) sauce:

Top with whipped cream or a sugared vanilla bean if you're feeling fancy!

Raisins, eggs, pecans, bourbon - sharing this recipe might be the nicest thing I've ever done.

Do you put eggs in bread pudding?

Yes, eggs are included in the custard base for bread pudding, along with milk, vanilla, sugar and vanilla or other flavorings.

How do you eat raisin bread?

Raisin bread is fabulous in grilled ham and cheese sandwiches, as simple toast with butter or cinnamon sugar toast, and it is fabulous in bread pudding!

Do you put egg in bread and butter pudding?

Yes, bread and butter pudding is a form of bread pudding, which uses a custard base of eggs, milk or cream, sugar and vanilla or other flavorings.

What is the best gluten-free cinnamon raisin bread?

Both Canyon Bakehouse and Trader Joe's make good gluten-free raisin bread, and both are readily available.