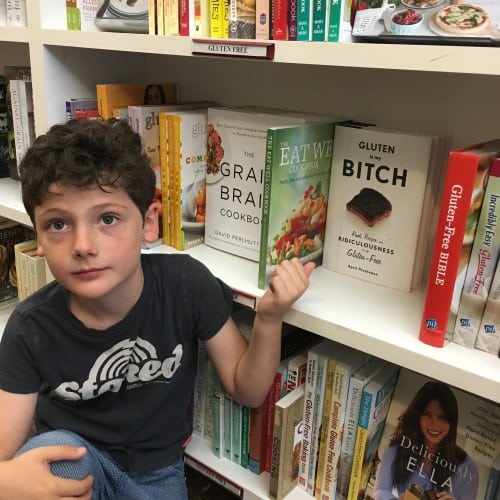 Just got back from Portland, Oregon. Totally full.

In spite of a rocky start wherein I was chasing children and eating whatever landed in front of my face, the rest of my Portland trip was filled with gluten-free goodness. And goodness, and goodness.

Lordy, do they know how to make a gfree lady fat and happy. Emphasis on the fat. I’m going to have to start doing cross-fit or something to work off all that deliciousness. Kyra, I’m blaming you for most of it. You guys, her cinnamon rolls and big pink cookies could bring about world peace. This one –

I’m craving this, hard. That, and the all gluten-free food gorge Kyra and I went on at Groundbreaker Brewing. But since I’m back in LA and just have pictures and memories, let me tell you where else you can get your gluten-free eat on in Portland, and then just be jealous of your meals.

Here’s where I admit I ate at this entirely gluten-free restaurant three times in two weeks. You guys, if someone is going to fry gluten-free cheese curds for me, I’m going to keep on going back. I decided the gluten-free beer battered with chile was the best coating for my fish and chips, alongside a gluten-free Groundbreaker IPA. I miss Corbett’s Fish House SO MUCH RIGHT NOW.

Not the only all-gluten-free restaurant in town, Harlow is also a totally gf joint with much healthier options. So yes, it was delicious, but not fried. So minus 2 points. Kidding! You’ve got your vegan, your raw, your gluten-free, your kombucha, all in one place. I had a dirty chai to drink and this chipotle chili bowl with a side of a gluten-free biscuit. Delicious, you guys. And I felt like I could still have dinner later. Which I need, because there are too many amazing restaurants in Portland.

Hanging out with Buddies Making Nachos

The best part of my Portland trip was getting to hang out with my great friends I don’t see often enough. Portland is filled with nice people, and even some imported from New York and San Francisco (specifically, since those were where my friends happened to come from on this particular trip). May I suggest you plan a friend reunion in Portland, Oregon? It’s pretty great.

I was lucky enough to have a house with full kitchen and stuffs and my new best dog friend, Skippy-

and a lot of friends around to make a lot of meals at home. We found some amazing gluten-free rolls at a farmer’s market in the SE near the People’s Food Co-Op. Lots of great options at New Seasons, a fab grocery store, and additions from my friend (and house neighbor) Liz. Add multiple great cooks in the mix, and we did eat well without leaving the house. At first I forgot the aluminum foil, but as I got smarter, I was eating safe and super duper well. Nachos4ever.

Almost like hanging out with buddies, these peeps are the brewers ofOmission’s gluten-free beers. Also, gluten-free Buffalo wings. I love them for many reasons, not least of which is they sponsored an off-the-hook book party for me when Gluten Is My Bitch came out. Naturally, I come back when I can to relive the glory that was someone else making my favorite gluten-free mac and cheese recipe (see Gluten Is My Bitch, the book), so I didn’t have to. Right down the street from Widmer Brothers is the super cool dry goods store, Beam & Anchor where I got this amazing key chain-

Gourmet soft serve sundae bar with gluten-free toppings? Yes, please! I can’t believe I only ate here once, but my kids kept wanting to go to Ben & Jerry’s, and they do have a “safe” gluten-free list –

That’s not exactly safe. I mean, gourmet soft serve with whatever gluten-free toppings you can shove in your sundae hole? Maple Parlor is a no-brainer. Try harder Ben. And Jerry, too.

Something super fun all around Portland are the McMenamins’ family of theaters, pubs, restaurants, and hotels. Housed in existing buildings like schools, theaters, exhibit halls, and houses, you never know what you’re going to get when you walk into one of these joints. We took the crew to see “Ghostbusters,” which I highly recommend, and I had a gluten-free burger(not seen because the movie theater was very dark and plus, you don’t take photos in a movie theater, people). I wish I could have hit more of these while I was in town, but have much to look forward to on my next visit.

There are over 500 food carts in Portland and while I wish I could have eaten at every one of them, I had to go back twice to Fried Egg, I’m in Love not only for the amazing name, but for the separate pan cooking up a gluten-free breakfast sandwich to die for. My picks include the Egg Zeppelin (as seen above) and the Yolko Ono. My kids loved the ‘Rito Suave breakfast burrito, which wasn’t gluten-free but gets mad points for the name.

A torta food cart may not seem like a great idea for the celiac, and it’s not like it was. However, the bowl of deliciousness with carnitas really hit the spot and was safe to boot. Spicy corn and a cider on the side made for the perfect vacation lunch. Also got to introduce my kid to a torta as big as his face, so that’s one thing off the list. Don’t mind the alien arms coming out of the bowl. I totally knocked that out.

This is my new favorite candy. These Dream Come Chews just melt in your mouth and I may have eaten 5 in one sitting. All of Quin candies are hand made, some of them from my favorite canned wine.

Yes, I do have a favorite canned wine, you gotta’ problem with that?

One of you fine people recommended this fun joint to me and in addition to having this delicious pizza, this place tickled my funky bone. Booths outdoors, you guys. Clever. Also, lots of gluten-free beer and drinks available, which seems to be the norm up in the PNW. It’s just so nice to have a pizza made for you that won’t make you poop your pants. Really nice.

One of the most fun dinners, ever, The Woodsman isn’t specifically gluten-free but I did find plenty of options that blew my mind. Like this Dungeness crab avocado appetizer, and oysters for those that don’t mind slimy things going down their throat. And if you’re still hungry, a double cheeseburger with a lettuce bun and patriotic toothpick.

I loved this all gluten-free Mexican style extravaganza the last time I was in Portland, so was stoked to go back. This is the quesadilla special with loads of chicken and other deliciousness. I think every restaurant should have a quesadilla special, and I’m going to start shouting that near and far. We also had an amazoids chorizo queso appetizer-

As you can see we went to town on it before I could get my camera out, because it was so good. I love this place, and love how safe it is to eat here. I would recommend a reservation however, as they did seem very rattled to have our group walk in on a Friday night, even though it was early in the evening. It’s popular, guys. Take a note.

Not in Portland, but up the road in Hood River, Oregon, Solstice had a significant gluten-free menu and this significant pork chop sandwich. My kids got pizza, and one of them even got the gluten-free version, when we went on a road trip to the Gorge.

Oregon is pretty ya’ll. I get what all the fuss is about, beyond the food. Because honestly, I was all, “Portland has the greatest food. What else?” What else is this-

And now for a warning of where to never, ever, go. Unless you’ve already eaten breakfast, and just want to get a big kick out of watching kids making ‘effed up pancakes. Which I did. Except for the breakfast part. Slappy Cakes is a make-your-own pancake restaurant which does have a gluten-free batter option. But would you eat pancakes made right after a group of chocolate-peanut butter pancake makers? Not if you’re me, or those of you who poop when that happens.

So I ordered the Huevos Rancheros because it was gluten-free, but that kitchen, and the grill right in front of my face, were lousy with gluten. And I did get sick, in spite of trying not to breath in pancake dough. This should not have happened, yet it did. So I’ve come to the conclusion that a celiac just cannot be safe in Slappy Cakes. Sorry, guys.

Other great places I chowed down include: Tula’s, Petunia’s, New Thai Blues,Country Cat, lots of food carts I can’t remember, and my kids chowed down on gelato at Pinolo and ice cream at Salt & Straw. It was the most glutinous trip we’ve ever been on, for sure. But at least they came home with these-

That Time I Had My Family Eat Cricket Flour | April, Anti-Gluten Activist