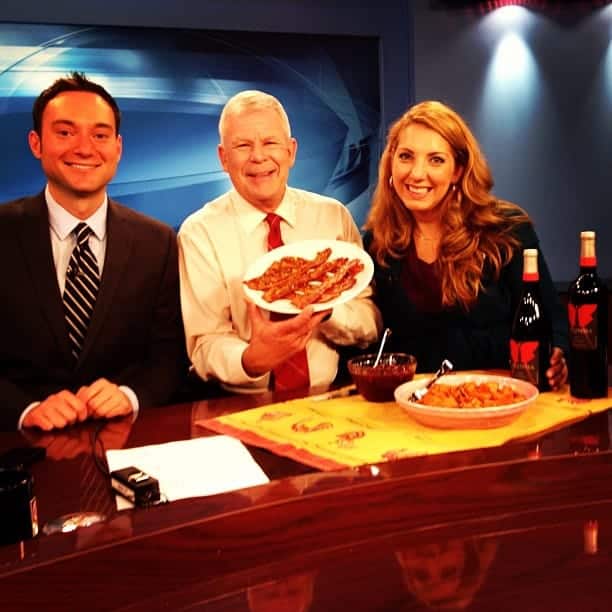 Live TV can get pretty interesting.

A couple of days ago, my friend Zara from the local CBS station called, to see if I'd like to come on their morning show to cook Gluten Free Thanksgiving side dishes and talk about wines for the holidays, since I've joined the team at CRU Wine Company. Sure, I said. Cool. I'd love to.

I decided to make Pistachio Pig Candy, since Zara & I had talked about it and she hadn't tried it. I'd demo homemade Cranberry Sauce in the first segment (it's so easy!), Butter Pecan Sweet Potatoes in the second, plus talk wines. We're all set.

I cooked until 1am, mostly because I had a meeting with my awesome CRU team & then I had to wind down, plus I was watching crappy reality shows while I was chopping (Dear Real Housewives, Thank you again for making me feel so much better about myself. Love, KC). And when the alarm went off at 4:15 this morning, I decided I'd better make another batch of Pig Candy in case the station crew was hungry.  They usually are.

I was running about 10 minutes behind, what with the bacon cooling and the TV makeup & all - so I was not particularly excited when it started to rain on my drive to CBS, especially because my segments are shot in an outdoor kitchen. It rained when Chef Mike Shackleford & I were there a month ago, too. The state should probably think about hiring me to go on TV in drought years.

Once I was halfway set up, it really started pouring. The crew offered to move me into the lobby, an offer I accepted, since my mobile burner is electric and I wasn't trying to make tragedy TV. As we were running short on time and Mike Scott was filling in for a sick Zara (yeah right, Twilight!) we're gonna shorten it up to one segment. No problema. I fired up the cranberry sauce, and waved at the camera while they shot the "coming up next" teaser.  And then we did the microphone check.

You know what you need on live TV? Sound. Guess what we didn't have & couldn't fix in roughly a minute & 30 seconds?

That's when the camera guy, a production dude, and I tore through the studio carrying 5 bottles of wine, 3 plates of food, a fork and a dishtowel. I jumped into a chair on the anchor desk & lined up dishes while they slapped a mic on me. The girl who put my mic on stepped out of the shot just as Mike started to say "KC Pomering, from CRU Wine Company & G-Free Foodie." When he thanked me on the air for rolling with the punches, I said: "Well Mike, we're all here 'cause we're not all there."  I'm an honest person.

Justin, the evening weatherman, was filling in for my friend Jenny Toste too, so we were really quite a crew. I stayed on the anchor desk until the show closed, talking with Mike about Hostess closing and rainy roads and Unoaked Chardonnay, since it's my favorite.

After the show ended, I laughed with Mike & Justin, chatted with the crew, left them wine & food, and went to get a quad latte.

I'm writing this post while another batch of bacon is in the oven, because I felt like I couldn't tell this story at the winery without some Pig Candy.