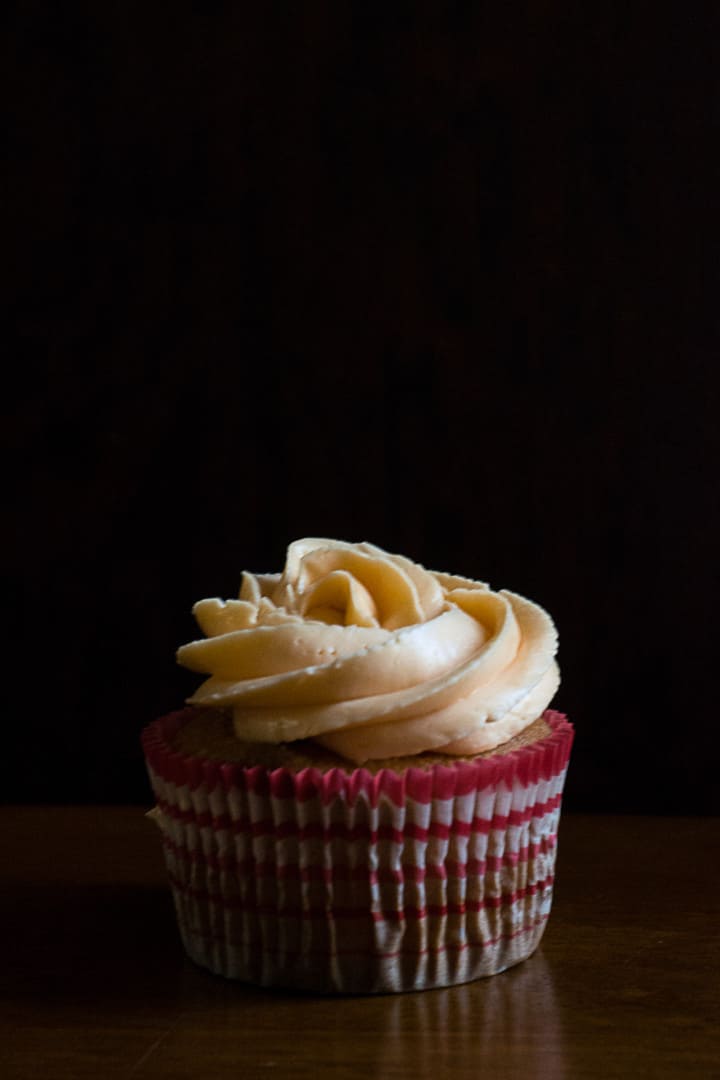 Delicate almond cupcakes with a fluffy frosting and tart + sweet apricot filling. What more could you ask for?

This Gluten-Free Almond Cupcakes with Honey Merengue Buttercream and Apricot Filling recipe is simply delicious. Apricots, almond and honey are three flavors that belong together in delicate cupcakes that will win over any crowd.

I really just want to share these gluten-free cupcakes with you.

It’s no secret that I think cupcakes have magic healing powers. Or that they are a divine sort of therapy. This particular recipe is no exception. Actually, it might just be the cupcake that proves the rule.

This summer hasn’t been quite what I had planned for myself. There haven’t been neighborhood festivals every week or long walks on the lakefront discussing the meaning of life, the universe and everything. (Ok, fine knowing the answer to all of that at 42 defeats the point of the discussions, but I digress). It was supposed to be filled with trips to friends in not too far away places and movies in the park. I was supposed to be making new friends and cherishing the time I had left with some of the old ones before they moved away.

I was a little lost.

But these cupcakes. These delicious, sweet things. They kept coming to me. When I could do nothing more than lay still and hope there wasn’t a breeze, I would imagine the tart apricot filling bursting from the cake. I could feel the honey buttercream melting on my tongue. The scent of the almond cake invaded my dreams.

I owe these little cakes a lot. Not only did they give me a treat to focus on while I waited for a new wave of treatments, they gave me a way to make an impression on some new friends. Such an impression that I might have found a suitable stand-in for Helen when she leaves me for that silly PhD she wants to earn. They might have won me the hearts (and stomachs) of a few good people.

I hope I have set your hopes quite high for these cupcakes. Because they really ought to be. You see, they are almost perfect – delicate flavors that build on each other. Surprise centers. A classic combination in a form that looks like it could be any old cupcake. And then you eat it. You get a taste of what got me through a rough patch. You get to take a giant bite of friendship with a heart-filled center.

That, my friends, is what this is all about.

(A small confession: I might have raided MammaCakes’ pantry for some of her home-made apricot preserves. If you know MammaCakes, I highly recommend raiding her pantry as well )

Recipe and article courtesy of  Mary Fran Wiley of Frannycakes

For the Honey Merengue Buttercream