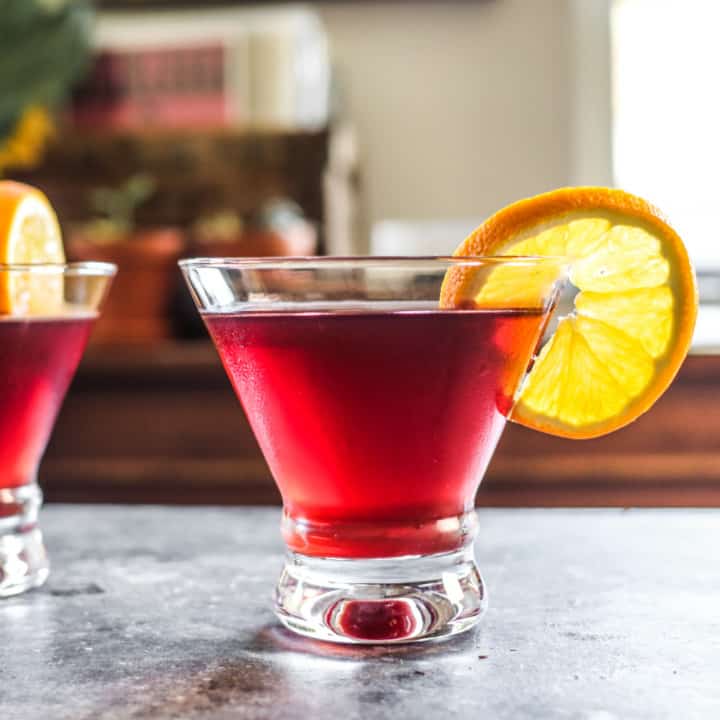 Hey - it's KC. We get so many questions about Gluten in alcohol & wine, and if you read G-Free Foodie often, you've already got the story on Wine, Spirits & Gluten Free Beer.  But - I thought this article was great, so I had to share it! (And, I love that Pomegranate Martini picture, so I'm always looking for a reason to use it!)

Confusion still abounds when it comes to gluten-free foods and beverages (see my earlier blogs “Sushi is not gluten free” and “Is HoneyBaked Ham gluten free?”). Now I’m taking a look at wine and alcohol. Of course, it's your health, so if you disagree or have other info, please add a comment below.

Yes, wine is gluten free. It’s made from grapes and sometimes other fruits, all of which are naturally gluten free. Likewise, port, sherry, and vermouth, which may have additional distilled alcohols (see below), are gluten free.

"What about the flour-based paste?" you say. You may have heard about European oak wine barrels sealed with a flour-based paste. This is extremely rare, and the gluten wouldn’t in fact touch the wine. I don’t know anyone with celiac disease or gluten intolerance who has ever experienced a gluten reaction to oak-aged wine (though some people do experience a reaction to sulfites used in wines). Even so, if you’re scared of the wine you won’t enjoy it, so ask the vintner or choose a domestic wine that’s fermented in stainless steel.

There’s another wine process, called fining, that’s done to clarify wine (fining goes beyond filtering because it also removes soluble particles). It’s possible that a fining agent could contain gluten, but it’s extremely unlikely; more common fining agents include egg white, casein, isinglass from fish, and gelatin (a problem for vegans or if you’re allergic to any of those). And fining agents are removed along with anything they pick up in the wine.

Distilled alcohols are gluten free. This includes vodka, bourbon, rye whiskey (yes, I know rye has gluten; stay with me), scotch whiskey, rum, brandy, and gin. Even though these alcohols may be made from fermented grains that include gluten, the final product is produced through a distilling process, which removes the gluten protein and leaves only alcohol. Just be sure the manufacturer didn’t add barley or some other gluten after distilling.

Beer, lager, and ale are not gluten free. That’s because they’re fermented, not distilled, from grains, particularly malted barley—so some gluten remains. However, there’s a growing number of gluten-free beers out there, including Bard’s Tale and New Planet.

Hard cider may or may not be gluten free because some use barley malt, which contains gluten. Likewise, check labels carefully on drink mixers like Bloody Mary mix or margarita mixes, wine coolers, and other “wine-like” drinks which may also contain barley malt, malt vinegar, hydrolyzed wheat protein, or other wheat-containing products.

And, of course, enjoy all alcohol in moderation. Cheers!

« Which Lipid is Wicked?
May is Celiac Disease Awareness Month »