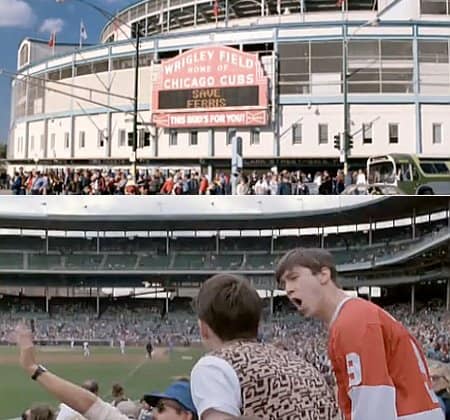 Finally - I know whether the Cubs REALLY won the game in Ferris Bueller's Day Off - or if the celebrating was just for dramatic effect.

Nope, this blog post doesn't have anything to do with gluten - or event cooking. It's all about me being a child in the 80's, John Hughes movies, baseball, a husband from a vowel state and whether Matthew Broderick is smarter than Micheal J. Fox. (Yes, I often tried to make this call - but you can't do it, can you? Go ahead - try. Alex P. Keaton vs. Ferris Bueller, Back to the Future vs. Project X - too many variables. I mean, you can go all "Teen Wolf" on me - but then you have to consider The Secret of my Success - and don't get me started on WarGames.)

So - I love 80's movies - in fact, I like them so much I thought marring a man from Illinios would help me gain understanding of the characters in the Breakfast Club - plus, he reminds me of John Cusack. (I still don't know anything new about Molly Ringwald, but I know where they filmed Groundhog Day and LOTS about the Rockford Peaches.) I also love baseball - although not at the same level my grandma does, but that's another post.

So, all in all, I was so excited to read David Brown's post about this discovery that I decided to share it with you:

With pitchers and catchers only moments from reporting to spring training, nothing else says baseball like an investigative essay about the time Ferris Bueller took in a ballgame at Wrigley Field.

Yes, Larry Granillo of Wezen-Ball has done it again. Piecing together details from "Ferris Bueller's Day Off" and the Baseball-Reference website, Larry does his best Sherlock Holmes-ian deducing to conclude which Chicago Cubs-Atlanta Braves game that Ferris, best bud Cameron Frye and special lady friend Sloane Peterson "saw" in the 1986 film.

You're probably thinking: What took someone so long?

What a cool way for Larry to introduce himself to readers at Baseball Prospectus, where he also now contributes:

It appears obvious now that this is a real ballgame that Ferris is at, not just something recreated for a film crew. The Harry Caray play-by-play and the Braves players on the field are pretty solid evidence of that. So what game, then, are they watching? Did the Cubs win, or did Ferris sing "Danke Schön" as a way to wash away the stink of a Cubs loss?

The movie "Ferris Bueller's Day Off" was released on June 11, 1986. The ballgame then must have been filmed either real early in the 1986 season or sometime during 1985. Looking at game logs from those seasons, we see that there was no game in 1986 in which Lee Smith (#46) faced the Braves at Wrigley Field. There were four such games in '85, though Smith left the Braves hitless in one of those. Of the remaining three games, it isn't hard to find the game we're looking for.

It might not have been "hard," but Larry appears to be the first person in the history of the Internet to publish such a finding. His conclusion: It was a June 5, 1985 game that the Cubs lost (of course they did) 4-2 to the Atlanta Braves. Go on over and please read Larry's post for more of his detective work.

That's not to say that there might not have been any movie magic at play here: SB Nation's Al Yellon presents his case on why Matthew Broderick, Mia Sara and Alan Ruck likely shot their Wrigley scenes later in the year and the TV footage of the June 5 game was edited into the movie later.

Here's a hilarious video & parody from a guy names Daniel Bissell who is, clearly, a bigger Ferris fan than I am.