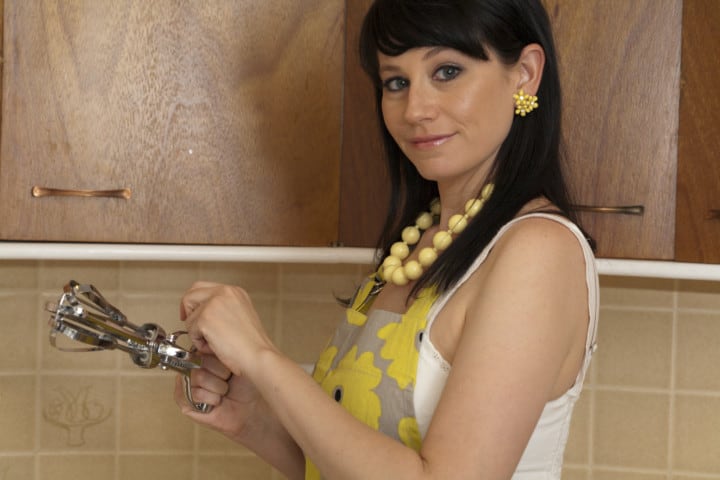 You that feeling when you meet a person and you just click? It was like that for Erica & me, both gluten free, and fans of  wine, coffee & acerbic jokes - it felt like we had enough in common for two friendships! And I love Matt, known as her "non-GFBF" on the Celiac & the Beast blog.

Erica's contributing to G-Free Foodie now, so we'll be posting some of her incredible reviews & hilarious posts. Go check out her blog in full, and give her a Like on Facebook. Tell her K-Lo from GFF sent you!

Here's my interview with my GFCFGF - read it while drinking coffee! KC

1.  How long were suffering from symptoms before you were diagnosed with Celiac Disease in 2009?

Honestly, I have no idea. I've had apthous ulcers since I was a kid - I have no idea if it was from gluten exposure or not. I suffered from terrible anxiety and just general malaise often. I ate gluten ALL. THE. TIME. I can't even tell you how many nights I just made pasta and chicken for dinner until my 20's. I was also 20 lbs. thinner than I am now and had anemia - which all fixed itself after going GF. Since I didn't have digestive symptoms, it was hard to know when things really started before the straw that broke the camel's back.

2.  Your symptoms weren’t necessarily typical Celiac symptoms, tell me about them.

I got these huge disgusting ulcers in my mouth and covering my tongue - to the point where I can't eat and can't talk. They happen every time I eat gluten, so it's my only indicator - I don't have stomach pains and cramps. I could eat an entire plate of Pasta Roni now and not feel it immediately (although I won't). I also have neurological problems like running into everything (including walls), anxiety to the point of being on medication, and just struggling to be awake and active during the day. These things didn't necessarily go away when I went gluten-free, but I think I'm making progress. My stomach also shut down with a case of gastroparesis. One day I had the stomach flu and I never recovered from it - I couldn't eat or drink anything over the size of a fist without getting so nauseated and just sitting and crying. I had to sleep upright to prevent vomiting and I was terrified that I was becoming anorexic again - it terrified me. After many tests, we realized that my stomach wasn't pumping properly and it took forever (like days) to digest my food. I took many medications (even some black-boxed by the FDA) and I finally found a pill that wasn't FDA approved that I took for years that made me feel better - but it wasn't until I went GF that my stomach recovered.

3.  When did you start your blog, Celiac and the Beast?

End of March 2011. Oddly enough, I was laid off of my job a few days after that, so it was the right time to really focus on starting my own life and my own blog about my time spent with the disease. Since bloggers were the ones that helped me when I was diagnosed, I wanted the chance to give back to the community and share my story with others. Plus, I had a lot of time on my hands!

4.  We love your line of t-shirts.  Did you design them yourself?

My partner Matt designed them (also known as non-GFBF to readers, although he is now 100% GF). He's quite talented. He originally made me these designs for my Christmas present, but my readers loved them and now we're using them as a way to proudly proclaim that you're gluten-free for life (as if you had another choice haha). We have incredibly high-quality merchandise that is soft - because I have such sensitive skin, I wanted something that if no one bought anything, at least I had t-shirts I could wear comfortably. Thankfully, it hasn't come down to that, yet. I am so lucky that we have designs that people want to wear to give them back part of what they lost with their disease. While others don't like to say that they are their disease - I'm proud to say that I'm a celiac! My genes are who I am, and I can't change that, so instead of being bummed out (which I still get often), I have to be proud of who I am and really embrace it - and I'm trying to change this world for the better for celiacs and people that need to eat safely. GF FOR LIFE! 🙂

5.  You hate cooking, but what’s your favorite meal that you cook?

I like the idea of cooking, but it's so overwhelming when you get in the kitchen to cook and you have 10 different things going all at once. I actually like being in the kitchen as the sous chef. I do menu planning and then menu prepping - buying all the ingredients, chopping the veggies and preparing the pans, etc. But the actual cooking (especially working with oils and things that can catch on fire, just isn't for me. Baking is more my thing. Less chance of combustion there. We love making spaghetti using spaghetti squash and Italian seasoned turkey with lots of veggies, I also like using the Madras Lentils mix from Tasty Bite with ground turkey over baby zucchini and gold potatoes.

6.  Are there 5 items that you always have on hand, either in your pantry or your fridge?

7.   What’s your favorite thing about life in Phoenix?

Although we're a conservate state, we live in a very fun and liberal part of town. We've got a lot of young people like us, hipsters, and people who love vintage like we do - we live in a historical 1950's home right now. We have great shopping and great upscale dining - including Fox Restaurant Concepts that always have a good GF menu and servers that actually know what they're doing.

8.  Got a food or beverage you can’t live without?

Again, coffee. Literally, probably couldn't wake up without it. And cookies. I have a very serious cookie problem.

9.  If you had to eat the same thing everyday, what would it be?

Breakfast: Udi's Everything Inside bagel with Earth Balance vegan butter and coffee. Lunch: Kale Salad from the restaurant down the street (it has quinoa in it - so good). Dinner: Spaghetti squash with Jennie-O ground turkey and veggie spaghetti sauce. Dessert: Cookies.

10.  Are there any products you’re particularly excited about right now?

There are so many great things coming into the market for our gluten-free life. I hear a lot of other bloggers get mad when larger companies come into the GF space with cookies, treats, etc. because they think that it's sending the wrong message - and that GF people should eat healthier. Well, of course we should ALL eat healthier, especially if you have an autoimmune disease and your gut is healing, but I strongly believe in everything in moderation. And I am happy every time something comes out that can make life seem NORMAL AGAIN. The cookie products are getting better and better - I don't even miss Chips Ahoy anymore! Everyone should be able to eat well, and have treats on occasion, so I'm very excited about what's coming into the market. And I think that if we, as consumers, keep supporting the businesses that do it RIGHT (no cross contamination, false marketing, etc.) then we will be rewarded with superior products down the line. I think some big hits recently are Glutino Toaster Pastries, cupcakes like Crave Bake Shop mixes and Wholesome Chow, Schar honey grahams, and Daiya and Against the Grain frozen pizzas (yes, we can have frozen pizzas now)! I'm now on the look out for great egg-free and dairy-free products too - but I'm just so happy we can walk into most grocery stores and find something for us now (besides the fruits, veggies, and meats that we have always had access to).

« Keeping Watch
Chewing Your Way To Health And Happiness »