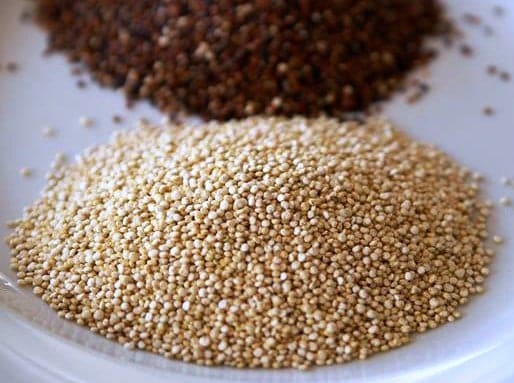 Here's the basics on quinoa - including the basic recipe.

All About Quinoa: here's the details about one of our favorite ancient gluten-free grains. Plus the easiest cooking method and the answer to the question: is quinoa gluten-free?

Quinoa (pronounced Keen-wah) is an ancient food that has been cultivated in South American Andes since at least 3,000 B.C. Quinoa has been a staple food of millions of native inhabitants, the Incas called quinoa the "mother grain" and revered it as sacred. Technically quinoa is not a true grain, but is the seed of the Chenopodium or Goosefoot plant. It is used as a grain and substituted for grains because of it's cooking characteristics. The name comes from the Greek words, chen (a goose) and pous (a foot).

Yes, quinoa itself is gluten-free! The quinoa seeds are completely free of gluten, and since they're processed in a different way than gluten-containing grains, cross-contamination in manufacturing isn't a concern either. The only issue is how the quinoa is prepared: like any gluten-free ingredient, is can be contaminated with gluten in the cooking or preparation process, so be sure to ask about the safety of any quinoa dishes when dining out.

In Peru, Chile, and Bolivia, quinoa is widely cultivated for its nutritious seeds, and they are referred to as "little rice." The seeds are used in creating various soups, pastas and bread, and also fermented with millet to make a beer-like beverage. Quinoa has been grown outside of South America for a relatively short time. It is grown in Canada and has been grown in the U.S. in Colorado since the 1980's. Quinoa can be found in most grocers and natural food stores in the U.S. Quinoa-based pastas, flours and wraps can also be found in major or specialty grocery stores.

Why Is Quinoa Different Colors?

It's all about the plant variety - just like apples or rice. Quinoa grains range in color from ivory to pinks, brown to reds, or almost black depending on the variety. There are over 120 species of Chenopodium, but only three main varieties are cultivated; one producing very pale seeds, called the white or sweet variety; a dark red fruited variety called red quinoa; and a black quinoa. Quinoa has a delightful characteristic that is all it's own: as it cooks, the outer germ around each grain twists outward forming a little white, spiral tail, which is attached to the kernel. You can look for different colors of quinoa in grocery stores or online. No matter which color the grain is, the spiral will be white.

Do I Have To Rinse Quinoa?

Before cooking, the seeds must be rinsed to remove their bitter resin-like coating, which is called saponin. Most quinoa is rinsed before it is packaged and sold, but it is best to rinse again at home before use to remove any of the powdery residue that may remain on the seeds. The presence of saponin is obvious by the production of a soapy looking "suds" when the seeds are swished in water. Placing quinoa in a strainer and rinsing thoroughly with water easily washes the saponin from the seeds. Some quinoa will be labeled "triple rinsed" or "rinsed and ready to cook" - in which case, you can choose to skip the rinsing.

The quinoa seed is high in protein, calcium and iron, a relatively good source of vitamin E and several B vitamins. The protein in quinoa is considered to be a complete protein due to the presence of all 8 essential amino acids. Quinoa is a 35 on the glycemic index.

Cooked quinoa is excellent in hot casseroles and soups, stews, in stir-fries, or cold in salads. The seeds cook very quickly, in only 15 minutes. Uncooked seeds may be added to soups and stews as you would barley or rice and quinoa is often substituted for rice in rice dishes. Dry roasting quinoa in a pan or in the oven before cooking will give a toasted flavor and enhance nuttiness. Cold salads consisting of quinoa and chopped vegetables or beans make an easy and nutritious dish. Quinoa flour is used in making pasta and a variety of baked goods such as pancakes, bread, muffins, and crackers.

Make this Basic Quinoa Recipe, then stash some in the fridge for bowls, salads, side dishes and more. You can use it to make two of my favorite dishes: Easy Pesto Quinoa with Tomatoes & Fresh Mozzarella and Quinoa with Fresh Herbs, Pecans & Pomegranate Dressing.  Try my friend Meg's Kale and Quinoa Bountiful Bowls too. 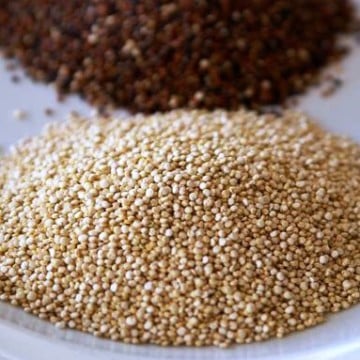 Refrigerate in sealed container for up to 1 week.

Wondering if rice is gluten-free? Get the facts here.

Does quinoa have protein?

Yes, quinoa has protein. The protein in quinoa is considered to be a complete protein due to the presence of all 8 essential amino acids.

Is quinoa a seed or a grain?

Quinoa is a seed. Technically quinoa is not a true grain, but is the seed of the Chenopodium or Goosefoot plant. It is used as a grain and substituted for grains because of it's cooking characteristics.

Yes, quinoa is gluten-free! The quinoa seeds are completely free of gluten, and since they're processed in a different way than gluten-containing grains, cross-contamination in manufacturing isn't a concern. However, gluten can be introduced to quinoa via cooking methods, prepared dishes and sauces. When dining out, gluten-free consumers should confirm quinoa dishes are prepared safely.