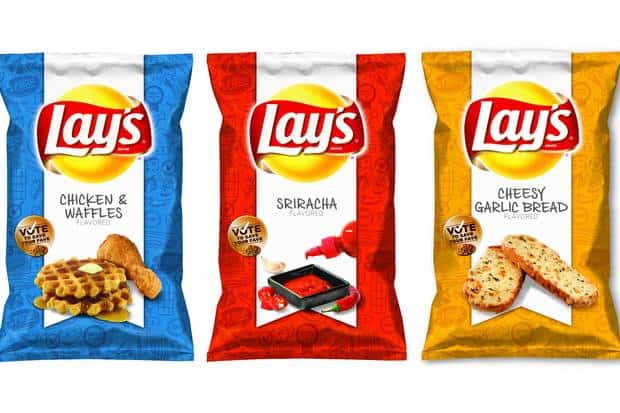 They say everyone you meet knows something you don't know. I'm certain that's true.

I'm also certain that some people need an occasional assist with common sense basics - and I've found myself reminding countless friends & colleagues, in a variety of situations, of a simple truth I learned long ago:

Just because you can, it doesn't mean you should.

I've made this statement in conversations regarding discount sushi, tattoos, marriages & more. Once, a friend of mine (with an inexplicable love for tube tops) suggested I try on a pair of white leather pants she found in my size. So, I created a variation of the rule, that my crew uses often:

Just because it comes in your size, it doesn't mean you should wear it.

There will never be a situation that requires my Kardashi-ass to be clad in white leather. Like, ever.

Yesterday, I was offered some Lay's Chicken & Waffle Chips, from Frito-Lay's new "Do Us a Flavor" campaign. I had seen the promotions, and was fairly certain that there was nothing about that product I was gonna like. Sriracha, maybe, because I love rooster sauce. But not Chicken & Waffles. (FYI: I love good fried chicken & crispy waffles. I generally dislike funky powdered flavoring.) I was curious, so I read the ingredients - no gluten used, like most of Lay's chip products. So I tasted them, and I psychically recoiled. Those chips are so bad, Eminem on his worst day is less offensive. At least he rhymes. New rule:

Just because you can eat it, doesn't mean you should.

It's really the main principle behind G-Free Foodie - yes, we're Gluten Free, but we want to eat what tastes good, what's healthy, what's delicious, what's in season. That's for sure the way I roll - I'm down for g-free pizza & beer, taco trucks or the fanciest restaurant in town, as long as it's good.

I'm staying out of the chip aisle until this is over.