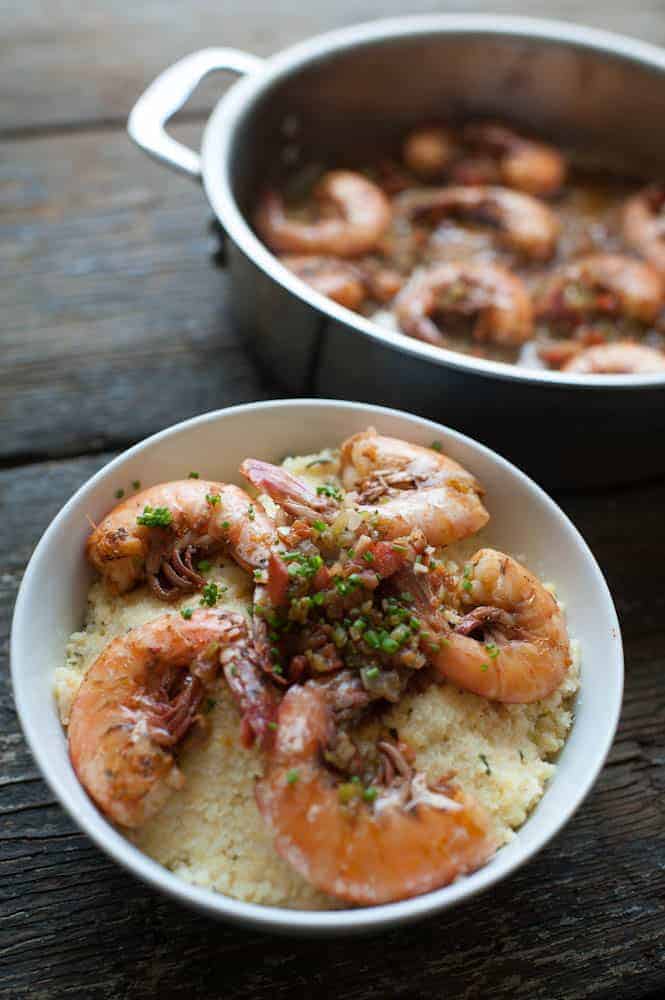 If you're going to try one Southern dish in your life, make it shrimp and grits. This warm + spicy shrimp and grits recipe is made with Gulf Shrimp, which is the best way to eat it - other than all the time.

This Louisiana-style Shrimp and Grits recipe is one of my favorite meals. For a moment I feel like I’m back in the South.

The moment I found out I needed to go gluten-free, I ran a quick checklist in my mind (true story). Can I have wine (yes), cheese (yes), Chocodiles (no), and Shrimp and Grits (yes!) – OK, I’ll be alright.

This shrimp and grits recipe came to me courtesy of my Louisiana-raised food photographer friend James, and is the best example I’ve got of real Southern cooking. Gulf Shrimp are available year-round, but Summer is the South’s prime shrimping season. Don’t even think about making this with anything other than Gulf Shrimp and seafood stock, and it’s best if you can get your hands on some real Southern Grits, too.

Shrimp: what’s with the numbers?

When you pick up a package of frozen shrimp or spy some in the cold case, you’ll see numbers with a slash to mark the size: 16/20 or 21/25, and so on. These numbers represent the “shrimp count,” or how many shrimp that size it takes to make up one pound. When you buy 1 pound of 16/20 count shrimp, you can expect to get 16 to 20 shrimp. Larger shrimp will sometimes carry a count number that reads U/10 or similar. The “U” stands for “under” – meaning it takes less than 10 shrimp that size to make up a pound. I use 40/50 count or larger shrimp in this recipe. 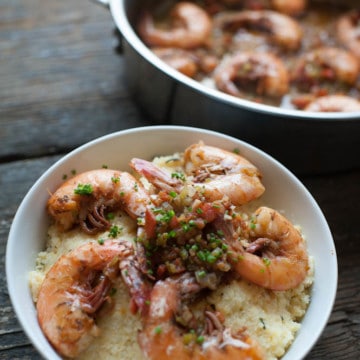 K.C. Cornwell
If you're going to try one Southern dish in your life, make it shrimp and grits. This warm + spicy shrimp and grits recipe is made with Gulf Shrimp, which is the best way to eat it - other than all the time.
No ratings yet
Print Recipe Pin Recipe
Prep Time 15 mins
Cook Time 44 mins
Course Main Course
Cuisine American
Servings 4 servings
Calories 320 kcal

Make it Dairy Free: use olive oil in place of butter