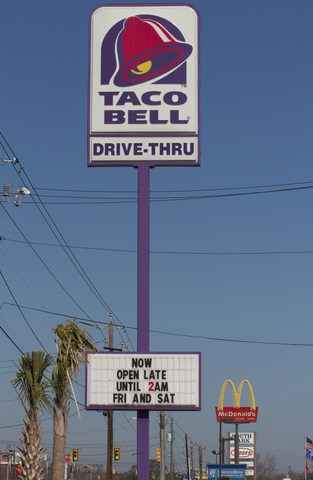 Taco Bell is the latest, and perhaps the last, fast food restaurant to join the nation’s health kick and start offering more nutritious menu options. In a bold move meant to cater to a larger demographic and compete with Chipotle, Taco Bell is now offering its Cantina Menu. The menu is designed to be fresher, less processed, and healthier. Menu options include Cantina Bowls and Burritos, now filled with cilantro-lime rice, black beans, romaine lettuce, creamy cilantro dressing, marinated chicken, fresh pico de gallo, roasted corn, and a real guacamole. The company’s website even designates the Bowls as free of both wheat and gluten, meaning they are (probably?) safe to eat for those trying to avoid gluten. So is this new menu a legitimate healthy and gluten-free option?

Let’s start with the basics. A chicken Cantina Bowl costs about $5 and while high in sodium and total fat, they are actually pretty healthy otherwise. One bowl contains about 550 calories, which isn’t all that much. And although it does contain 22g of fat, only 3.5 of those grams are saturated fat (the kind that leads directly to heart disease). The bowls are also free of trans-fat and contain a whopping 12g of fiber, which is pretty impressive given that it’s fast food. They also contain only 4g of sugar, and a very solid 26g of protein. The Cantina Burrito would be everything in a Bowl, except wrapped in a tortilla. This adds another 2.5g of saturated fat, 200 calories, and gluten. But if you’re sticking to a Bowl, I would say they are pretty solid nutritionally. Not that high in calories, low in saturated fat, low in sugar, and high in both fiber and protein. Could you eat something healthier? Sure, but you could also do a lot worse, especially at Taco Bell. The menu is available from 11am-11pm only, which could be somewhat problematic if you happen to be intoxicated at 2:00 in the morning and trying to eat a health-conscious meal. Ideally the menu would be offered during all normal business hours, right up until the usual 3:00 or 4:00am that most Taco Bells close. Because if you’re anything like me, you don’t even set foot in a Taco Bell unless it’s past midnight.

Ok, so nutritionally the new menu seems pretty solid. But did they have to sacrifice taste and palatability in order to deliver a more nutritious product? Well, if you’ll forgive me the ridiculousness of doing a Taco Bell food review, I did have the pleasure of having a Cantina Chicken Bowl last night for dinner. The first thing I’ll say is that for better or worse, it did not taste like I was eating Taco Bell. If I had been blind-folded, I wouldn’t have guessed that I was eating Taco Bell. The rice was nice and starchy, but overall somewhat bland and the black beans were just average as well. The lettuce was crisp and the pico de gallo tasted pretty fresh. The guacamole was pretty good as well and definitely significantly better than their usual “guacamole” (which I’m guessing contains at most 5% actual avocado). The creamy cilantro dressing was the right amount, not overdressed. It had a nice fresh taste and added a necessary unifying creamy element without being overly rich and soggy. The roasted corn was okay, and added a nice touch. But you could tell it wasn’t high quality corn and tasted like it had been sitting around for a while (which it had). The chicken was good, but not great. I really didn’t notice much of a difference compared with their normal chicken. Its flavor and texture were just okay, and could have been better seasoned and meatier. But its fast food protein, so expectations need to be scaled back. Overall taste-wise, I felt like the bowl was pretty good and all the elements worked together. There was starch, meat, crunch, creaminess, freshness, and acid in the dish. The big question is would I (and other consumers) rather pay another $2 and get a similar, higher quality product at Chipotle? Personally I would still opt for Chipotle, but the bowl from Taco Bell was pretty good for $5, an overall pleasurable eating experience, and something I would eat again.

Only time will tell what consumers think of Taco Bell’s new Cantina Menu, both financially and nutritionally. But at first blush, it seems like a pretty solid, inexpensive, mostly healthy, tasty, and gluten-free ingredient option. When compared with the rest of Taco Bell’s menu, or other fast food menus, it is definitely an option worth considering, unless you have Celiac Disease. If you have Celiac, you'll want to speak with a manager or skip the Bell. I have doubts whether it will stand the test of time, being that Chipotle is such a powerhouse right now and I don’t know if enough health-conscious people frequent Taco Bell to make the new menu a success. But we shall see.