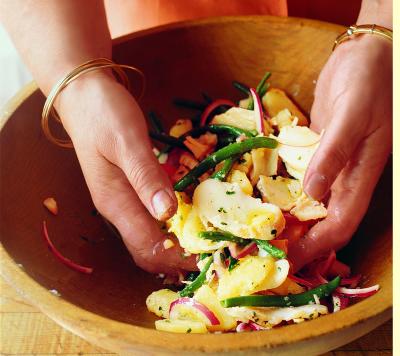 Bring a large saucepan of water to the simmer and drop in the soaked salt cod. Cook until the salt cod starts to open up and flake, about 8 minutes. Remove the salt cod from the water from a slotted spoon or skimmer and let cool to room temperature. With your fingers, flake the cod into pieces of about 1 1/2 inches, removing any bones and skin as you go.

Scrub the potatoes, place them in a large saucepan, and add enough cold, salted water to cover them by at least four fingers. Bring the water to a boil and cook the potatoes until tender but not mushy, about 35 minutes. Check them carefully toward the end of cooking and remove them before the jackets split. Once that happens, the potatoes can become waterlogged. Let the potatoes stand until they are cool enough to peel.

While the potatoes are boiling cook the haricots verts or string beans in a large pot of boiling water until al dente, tender but firm, 6 to 8 minutes. Drain and rinse very briefly under cold running water. If using the string beans, split them in half by pinching one end of the beans and pulling the halves apart, reserving any of the little beans that pop out. Set aside.

Assemble the salad while the potatoes are still warm. Peel the potatoes; slice them about 1/2 inch thick, and place in a large bowl. Add the string beans, red onion, chopped parsley, and salt cod. You may add all the salt cod at this point, or set aside some of the larger pieces to decorate the top of the finished salad. Drizzle all but 3 tablespoons of the oil over the salad and toss gently, to coat the ingredients with olive oil but keep the pieces of salt cod as large as possible. Season to taste with salt and pepper.

Beat the remaining 3 tablespoons olive oil with vinegar and salt and pepper to taste. Arrange the salad in the center of a large platter or divide it among plates. Drizzle the vinaigrette around the salad and decorate with the reserved salt cod and parsley sprigs, if you like.