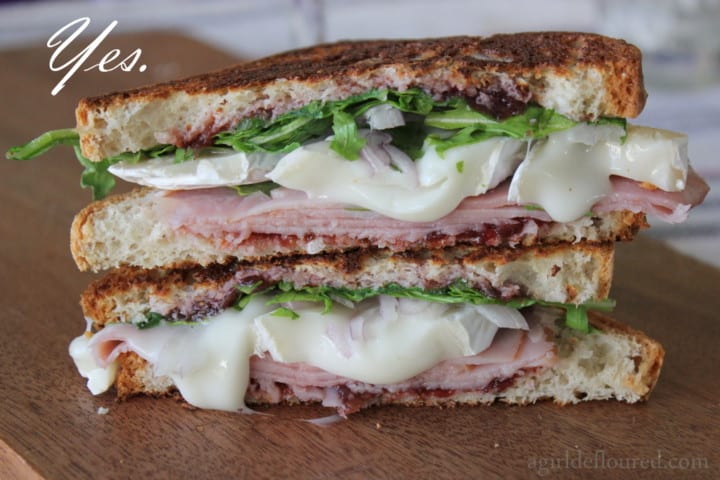 What do you cook on a Tuesday night when you’re rushing in after a long day before rushing out again to take the kids to soccer, or piano, or ballet? Do you drive through a fast food restaurant? Do you pop something in the microwave oven? Do you call the local pizza joint and have them deliver a pizza? (Gluten-free, obviously.) Or do you have something simmering in the crock pot?  (Wow, aren’t you a planner!) Time is precious, especially on a hurried weeknight. We often find ourselves tired and cranky after a long day, with hungry kids to feed. Nobody wants to cook on nights like these, even those of us who do it for a living. But with a well stocked larder (that is such a great word, isn’t it?), dinner can be on the table in less than 10 minutes–a dinner that tastes way better than fast food, and a dinner that is actually faster than fast food too! My friends, you must embrace Grilled Cheese Night! Grilled cheese sandwiches are pretty freaking fantastic, even when they are simple affairs, white bread and good ‘ole American cheese. But they are out of this world when you use fancier cheese, and throw in some veggies and ham or bacon. Some people have earthquake kits in case of emergencies…I have good cheese. And also good wine. Before Celiac Disease we served these up on the best artisan bread we could find, but now I’ll settle for the wholest-grain gluten-free bread I can get my hands on (that doesn’t taste like cardboard). And you know what? It still tastes amazingly good. That’s what good cheese can do!

Grilled Cheese Night is not a cop out, and it still totally counts as making dinner, even though it takes only minutes. Your kids will love you. You will love you. And that is worth more than a thousand protein-style cheeseburgers (with an allergy alert!!) from In-N-Out.