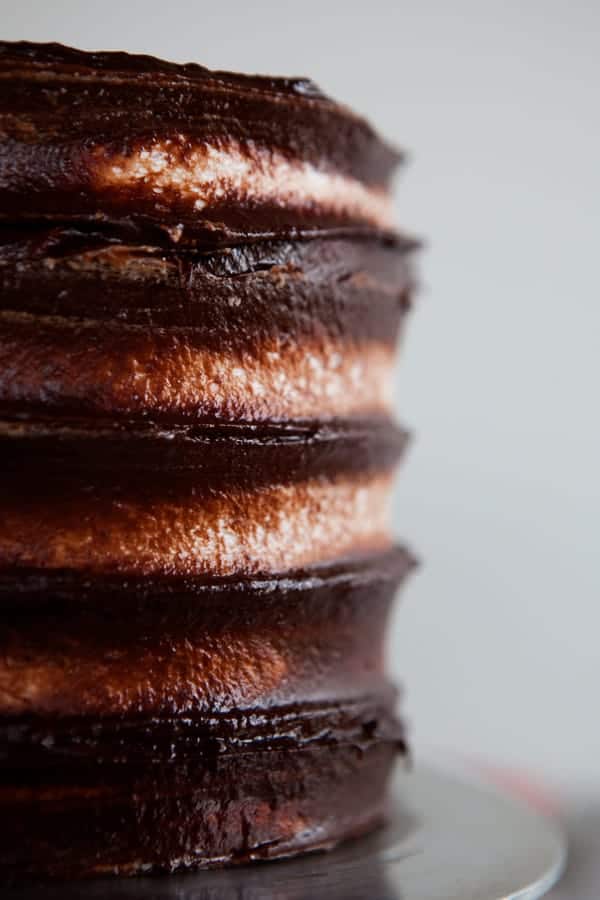 Divine Gluten-Free Chocolate Cranberry Layer Cake recipe from from our friend BraveTart. The rich chocolate layers are sure to wow on your holiday table. Get her delicious new cookbook “Iconic American Desserts” here!

Nobody wants an understated chocolate cake.

Well, at least not for an over-the-top occasion like New Year’s Eve. So if your resolution involves giving up or scaling back on dessert, you’d better stop scrolling now.

Chocolate cakes typically rely on deep, dark ingredients like black coffee, brown sugar, and Bourbon vanilla. Delicious, but not exactly in line with the bubbly spirit of New Year’s Eve. I wanted a cake that would pair better with champagne than cappuccino, something along the lines of a chocolate covered strawberry (but seasonally appropriate).

To make this chocolate cake feel festive and bright, I ditched the usual one-two punch of coffee and vanilla for cranberry juice and rose water. The same way coffee underscores the roasted bitterness of chocolate, cranberry teases out its natural fruit flavor. Even better, it tenderizers in a way that puts buttermilk to shame.

Rose flower water has a bad reputation, often used indiscriminately to overpower delicate flavors like yogurt or goat cheese. But it can’t bully dark chocolate. Against that sort of bitter intensity, its aromatics simply round out the flavor. It adds dimension like vanilla, but in a way that feels airy rather than deep.

Together the cranberry and rose make a cake that tastes every bit as chocolatey and complex as a traditional recipe, minus that earthy darkness. To play up the cranberry flavor, I paired it with Cranberry Swiss Buttercream and Cranberry Ganache.

Even if you hate rose flower water, I hope you’ll trust me on this one. You won’t taste the rose itself, but without its magic the flavor of the whole cake falls flat. If you haven’t used it before, you can pick a bottle up for about two bucks. You’ll find it in the international aisle of larger grocery chains, in upscale liquor stores, from your local Middle Eastern or Indian market, and online.

Then wow your friends with this delicious Chocolate Cranberry Layer Cake!

Chocolate Torte: for a single layer, divide the entire recipe by three. Serve with Cranberry Ganache and a dollop of whipped cream on the side.

Preheat the oven to 350° and line three 8” by 2” cake pans with parchment rounds; grease lightly.

Roughly chop the chocolate and place in a medium bowl; sift the cocoa powder over top. Meanwhile, bring the cranberry juice to a simmer in a 3 quart stainless steel pot. When it begins to bubble, shut off the heat and add the chocolate/cocoa all at once. Whisk to form a smooth paste, then stir in the rose flower water.

Using the same bowl and sieve from before, sift the flour and set aside.

In the bowl of a stand mixer fitted with a whisk attachment, combine the sugar, baking soda, baking powder and salt. Add the eggs and mix for a minute on low speed to moisten. Increase the speed to medium and whip until fluffy and light, about 8 minutes.

Stir the batter once or twice with a flexible spatula, then divide between the prepared pans (27 ounces each). Bake until the cakes are puffed and somewhat firm to the touch, though your finger may leave a slight impression; about 40 minutes.
Let the cakes stand at room temperature for 10 minutes, then loosen the edges with a knife, invert onto a wire rack, and cool until no trace of warmth remains. I like to leave the pans on top; it takes longer to cool this way, but traps steam to retain moisture.

Level the cakes with a serrated knife. Top each with a heaping cup of freshly whipped Cranberry Buttercream and spread into an even layer.

Leave the sides exposed for a rustic look, or give the cake a crumb coat and fully frost. For more detailed information, check out my Crumb Coating Video and Tutorial.

If you like, finish with a swirl of Cranberry Ganache. The spiraled edges give an illusion of the cake being much taller than three layers.