Recipes & Techniques by Cooks We Love

Having been eating really clean and super healthy for over 4 months now, I needed a little splurge after my week at my national pageant. However, my stomach has been really sensitive to a lot of things lately and I recently went through an episode of Eosinophilic Esophagitis. I think it was triggered by eating refined sugar after weeks of not having any but that is still just speculation. So, I wanted a treat but I looked for a recipe that had the fewest ingredients possible and would still be tasty and sweet! 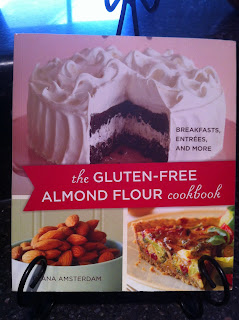 I have been a fan of Elana Amsterdam and her recipes since I was first diagnosed. Since I started following her, she has published two recipe books that are fantastic! She has always loved to cook but when she was diagnosed with Celiac Disease she wanted to find a way to make tasty meals for her family that they all could enjoy instead of having to cook two different meals. If you don't follow her blog, you really should consider it. She is an inspiration and while I have never met her in person, I am told she is just as beautiful on the inside as she is on the outside. I picked up her first book, The Gluten-Free Almond Flour cookbook, and flipped through the pages to find a simple recipe that I could enjoy and my tummy wouldn't reject. I stumbled upon a cookie recipe and was delighted with its simplicity! To my husband's delight - there was an icing recipe that was just a simple so I decided to make some cookies for myself and sweet southern whoopie pies for him!

Now, the recipe calls for ¼ cup scoops of dough onto the baking sheet. However, they come out way too big so I would recommend using a 1 tablespoon scoop instead and place them 2 inches apart from one another. Bake for 10 to 15 minutes until the tops of the cookies look dry and start to crack. Be very careful not to overcook them. Let the cookies cool on the baking sheet for 30 minutes and spread with frosting just before serving. If the frosting stays on too long it may make the cookies soggy.

MARSHMALLOW ICING
*Note: this icing recipe is not identical to Elana's but very similar

In a small saucepan over medium heat, bring the agave nectar to a boil, stirring frequently. Decrease the heat to low and simmer for 4-8 minutes, watching constantly and stirring occasionally, until the agave nectar darkens slightly from its original amber color.
In a medium bowl, add the two egg whites and the pinch of salt. Using a handheld mixer, whip the egg whites until they are no longer clear (about halfway through mixing) and add the cream of tartar. This helps to stabilize the mixture so it doesn't liquefy again. Beat the egg white into stiff peaks. This means, when you remove the beaters, peaks form and do not fall back over into the mixture. Be careful not to over beat the eggs or you could destabilize them. I had to make this recipe twice to get it right so, don't worry if it doesn't work out the first time. 🙂

Drizzle the agave nectar slowly into the egg whites, whisking continuously at a low speed until blended. Use to frost cookies. I put the bowl of icing in the fridge for about 30 minutes while the cookies were cooling to help it set and it spread a lot easier. The icing can be stored in a mason jar in the refrigerator for up to 24 hours.

Best part? My taste buds and tummy agreed on this recipe!