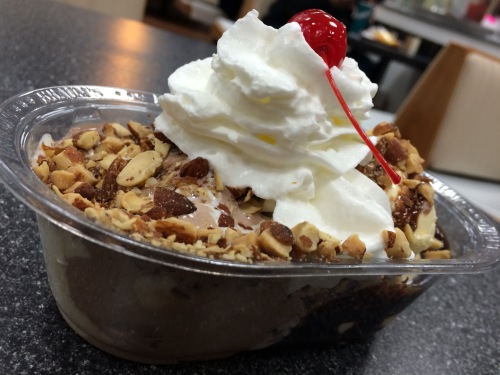 I’ve said before, I believe in my own dang book, that one can travel anywhere in the United States and still eat safely gluten-free. And while my challenging time in Oklahoma last week made me reexamine that declaration, I will stand by it. I COULD have camped out at Wal-Mart and eaten loads of gluten-free snacks. I also could have only eaten milk shakes all week. Things I considered, but rejected for health, time and good citizen reasons. Instead I ventured out into the restaurant world and, well, it didn’t always go fantastic like. But sometimes it did! Here are my OK wins and OK fails, gluten-free style. WINNERS!!!! Braum’s

I’ve made no secret of my love for Braum’s. In addition to launching this man’s career, Braum’s has the best black and white sundaes of all time, ever (see way above). My kids agree too, so there’s that. But what blew my ever loving mind was when I mosey’d on over to the country mart and found all of this gluten-free business. And that was only part of it! I mean, if you live in Oklahoma and need some gluten-free snacks or staples, please go to Braum’s. Just don’t forget your chocolate chip soda on the way out. The Hideaway

The Hideaway’s claim to fame is not only the pizza, or the hippies who founded it and worked there over many decades (shout out for the hippie/hacky sack renaissance of ’92), but the bragging rights of having a board game invented right there in the kitchen in the ’70s. If you ever played Pente, please thank your dishwasher at Hideaway in Stillwater, Oklahoma. Also, nerd. Personally, I’d like to thank them for the delicious gluten-free pizza using Udi’s and all of their original ingredients that I love for nostalgia’s sake, and also because they know how to do Canadian bacon right. FAILS Random Truck Stop Yes, you’re right I should have known better than to trust my gut to a truck stop. But the alluring signs promising pulled pork and catfish and made my entire family brake for gas, cowboy boots and lunch. Whatever BBQ brisket I had was not really related to the brisket portion of the cow, and the waitress also had zero idea what was in it. I do know that it came with bread. Lemonade was good.Hotel Breakfast I would name the hotel, but it’s been my experience that every hotel (except that amazing Embassy Suites in Austin, Texas) providecontinental breakfast filled with gluten. And while the nice lady working the breakfast line did go over the ingredients in the “cheese omelette” it was so processed I was still nervous. BYOBreakfast, gluten-freers. You win some, you lose some . . . El Vaquero When I was a teenager I used to go to Bobo’s Mexican Cantina with my girlfriends and order strawberry daiquiris. Before we got arrested we would say, “Virgin, of course,” because WE WERE HUGE DORKS. It was awesome. But now Bobo’s is El Vaquero and while I ate there safely, it’s no Bobo’s. Just sayin’.

While Eskimo Joe’s does have that handy gluten-free menu (which I MUCHO appreciate), it does not help a celiac when your meal arrives with bread plopped atop. And this is another lesson in the importance of an educated staff. I’ve always said you’re only as safe as your server, and I’d like to add food prep person to this list, along with chef (which is the obvious one). Eskimo Joe’s is a legendary college hang in Stillwater, Oklahoma. This means college kids are the wait staff, table runners, cleaning crew and a lot of the times—the cooks. I had many friends who worked at EJ’s in the ’90s, including my own big brother. They’re known for their amazing cheese fries (which are mercifully, gluten-free) and beer. Lots of beer. Not gluten-free. They are not known for professional wait staff and a 5 star dining experience. I’m not saying our waitress wasn’t friendly—she was Oklahoma friendly, which is a whole ‘nother level. I’m not saying the staff isn’t doing a great job. This biz has been running since the 1970s with a winning formula. What I am saying is that you cannot necessarily trust your allergic/diseased body to an 18 year old who just moved to the college town from Hennessey, Oklahoma. (Yes, I am getting in my old high school basketball rivalry burns with that reference.) Any kid who hasn’t grown up in a big city where they see gluten-free menus on the regular, or does not have a gluten-free family member, is not going to know that bread touching your gluten-free pork dinner is going to make you sick. They just won’t. Still, I would go back, because CHEESE FRIES. All righty then. If you’re heading to Oklahoma, good luck to you and godspeed. Eat at Braum’s as much as possible, and please note there is pizza galore that is gluten-free. Pizza and Braum’s? Not a bad way to eat your way through the Great Plains.  XO, GIMB