Gluten-free is the fad diet of the moment, but the wrong people may be on it.

Roughly 1.6 million Americans avoid eating wheat, barley, and rye because the gluten protein in those grains bothers their stomach or makes them drowsy, or they simply think it might help them lose weight. (Lady Gaga is reportedly going gluten-free in an effort to drop 10 pounds.)

A different 1.8 million Americans probably should be on a gluten-free diet because they have celiac, an autoimmune disease triggered by gluten — but the vast majority don’t know they have it, according to a July study from the Mayo Clinic.

This mismatch stems from a combination of factors, including a lack of awareness by many doctors, and the enthusiasm for such diets by popular media and people who practice alternative medicine.

Some doctors are dismissive of celiac and a less serious condition known as gluten sensitivity, because symptoms of both are vague and could be caused by many other things, said Dr. Alessio Fasano, director of the Center for Celiac Research at the University of Maryland School of Medicine. The blood test for celiac is simple, but doctors tend not to think to use it, he said. And there’s no test for gluten sensitivity.

No one can digest gluten, but in most people it passes harmlessly through the digestive tract. 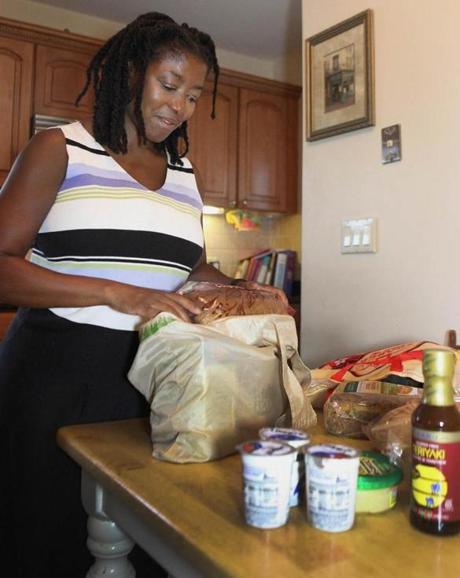 Genieve Rankel says going gluten-free has forced her to pay more attention to her diet.

For those with celiac disease, however, eating gluten slowly destroys the intestines, preventing absorption of nutrients and sometimes triggering symptoms that can include gastrointestinal distress, joint pain, depression, and even cancer in rare cases, according to Fasano.

Avoiding all gluten is an effective treatment for celiac disease, gluten sensitivity, and an allergy to wheat. But short of a positive test confirming celiac disease, doctors are wary of prescribing a diet that’s so hard to follow.

Giving up gluten basically means abandoning most of the staples of the American diet: cereal, sandwiches, pizza, beer, cookies, and cakes. It means reading labels carefully to avoid hidden sources of the protein in salad dressings, soy sauce, soups, and many fried foods.

For people without celiac, wheat allergy or gluten sensitivity, skipping gluten isn’t a healthier diet choice ­— and could even be worse, warned Dr. Joel Mason, a professor of medicine and nutrition at Tufts University.

A gluten-free diet is also short on vitamins and nutrients, including B vitamins, calcium, iron, vitamin D, and magnesium, Mason said.

And gluten-free products are often more expensive than conventional ones.

Yet, sales reached $2.6 billion in 2010 and will potentially top $4 billion in 2012, according to David Sprinkle, publisher of Packaged Facts, a market research publication covering the packaged food industry.

So, why is the market for gluten-free foods rising about 30 percent a year?

The increase could partly be because gluten-free diets are touted on websites and by alternative practitioners as a possible treatment for a wide variety of medical conditions, including autism, allergies, irritable bowel and chronic fatigue syndromes, and schizophrenia. There is some evidence connecting gluten with many of these health problems, researchers say, though science about the effectiveness of a gluten-free diet in treating them is thin.

Studies of children with autism, for instance, have been mixed, with some showing that gluten- and dairy-free diets can be helpful, and others showing no benefit.

The growing numbers of those eating gluten-free can also be attributed to tastier food options. And a gluten-free diet has gotten much easier to stick with in the last five years, as many more packaged and gourmet options came to market, and many more mainstream stores offer those options, Sprinkle said.

Until a few years ago, the breads, pastas, and treats labeled gluten-free were almost inedible. “Everything was extremely gritty,” and tasted more like the box than like food, said Natalie McEachern.

McEachern, who was diagnosed with a wheat allergy and then celiac disease in college, used to sell her gluten-free products wholesale and at a local farmer’s market. Now, business has gotten so good that she’s doubling the size of the Belmont store she opened three years ago, Glutenus Minimus.

Genieve Rankel, of Medford, gave up gluten about eight years ago after noticing that she got bloated after eating it.

“I went to faculty luncheons and I looked six months pregnant after eating pasta,” said Rankel, who was teaching high school math at the time.

Her husband, Steve Rankel, became a convert when his allergy symptoms disappeared after he gave up gluten and dairy for six weeks before their wedding.

Eating gluten-free now is much less challenging than when they began, both said, because they’re used to it now, and gluten-free products have gotten tastier and more plentiful in recent years.

“There is no suffering on my part,” Steve Rankel said.

Genieve Rankel said she’s never going back to eating gluten, because she feels so much better now, and because she likes that extra attention she has to pay to her diet.

“In a lot of ways I feel lucky to be gluten-free and dairy-free,” she said, “because it makes you be mindful of what you’re putting in your body as opposed to throwing stuff in.”

Reducing our overall gluten intake could have long-term benefits, according to Fasano, of the University of Maryland.

“If we use rather than abuse gluten products, like our grandparents used to do, maybe we  . . . can reverse this celiac epidemic,” he said.

« Food vs. Juice vs. Vitamins: Who Wins?
Nutrition for Mental Health and Emotional Wellness »