I received so many compliments on the food at my mom's birthday at La Nebbia winery that I had to share my strategy and menu. My mom is very heath-minded and I wanted the food to parallel her lifestyle (think Paleo) .  Also, everything needed to be do-ahead and self-serve since I didn't have a caterer or waitstaff.  Check out this Pinterest board to see lots of other fantastic ideas that didn't get used.  Here is the menu and keep scrolling for details and recipe links...

One of the first things I pinned was this Tangled Thai salad which spoke to me because they use a spiralizer to make carrot and beet "noodles" which is something my mom uses in her kitchen.  Also, I love a good peanut dressing!

In the planning process I realized that spiralized noodles probably wouldn't hold up in a giant serving dish for 50+ guests.  So I ended up with a slaw...  Don't skip the lime and peanut garnish, it makes the dish! 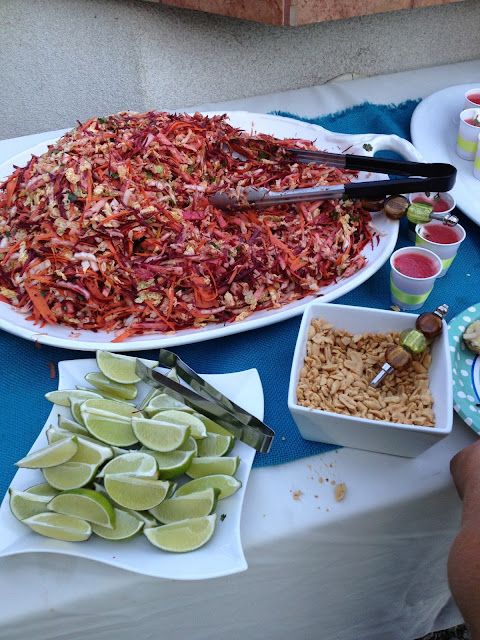 Another summer favorite of ours is ceviche.  I made a shrimp version (with little salad shrimp instead of large shrimp), portioned out in cups over tortilla chips and served over ice.  I didn't do the traditional way of cooking, or not cooking, the shrimp in acid.  It was so simple and everyone absolutely loved it.  It has finely diced red onion and cucumber, shrimp, cilantro, jalapeno, avocado and LOTS of lime juice.  I used this recipe from Food Network to help me with my ratios, but the recipe is for a "ceviche cocktail" so omit the catsup and hot sauce... 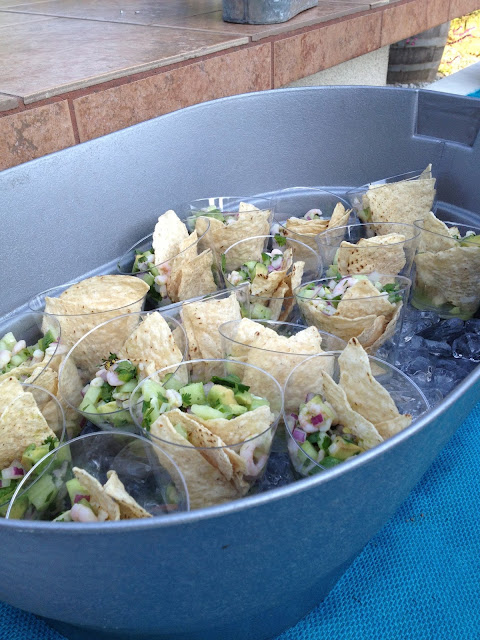 I also made a (tropical, I guess) chicken salad that I make for myself regularly at home.  It has greens, red onion, chicken, fresh pineapple, mango and mint.  I normally use Trader Joe's Spicy Peanut Vinaigrette but I didn't want two peanut dressings so I used a store bought honey balsamic dressing since balsamic tends to go with fruit.  I poached the chicken (see next paragraph) and chopped the fruit the night before, and then we put it together just before the party.  We reserved some of the fruit and red onion and arranged it nicely on top, although the picture is after several people had gotten to it
I think I got the best poach ever for this dish.  I brought a large stock pot of salted water to a boil and added around 15 chicken breasts.  I tried to keep it at a simmer for ten minutes but it was actually hardly bubbling as it took time to bring the water temp back up.  After the ten minutes I drained off the water and left the chicken in the warm pot, covered, pretty much until it was cool.  Then I cubed the chicken and stored in a Ziplock bag 'til we used it the next day.  It was moist and seasoned even though it was just plain old chicken breast and I had only salted the water. 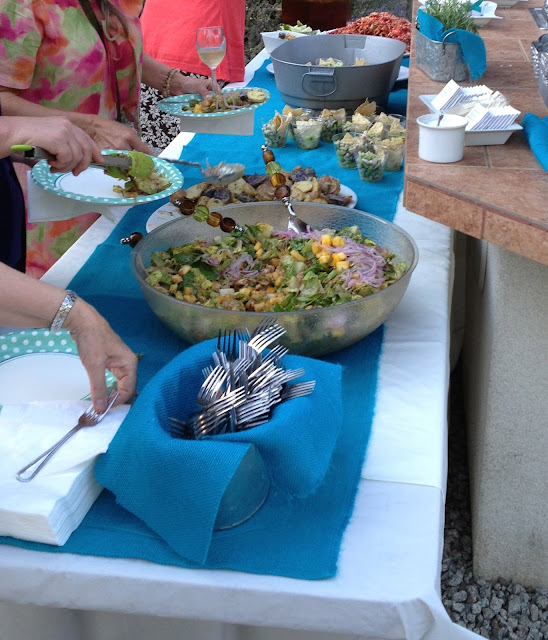 See the dish hiding behind the chicken salad in the photo above?  That is our French potato salad!  I wanted to have something heartier than a green salad but also vegan/vegetarian and this fit the bill.  I found this recipe from Martha Stewart and a friend graciously made it for the party, with sherry vinegar and fresh tarragon.
The same sweetheart of a friend made watermelon lime soup shots with a dollop of yogurt - YUM!  She had a Vitamix so I batted my eyelashes and said pretty please and asked if she could do a cold soup (I'm not that convincing, she is just super nice!).  I was thinking watermelon or cucumber, and she found several yummy recipes and chose the watermelon lime.  I couldn't find any decent looking plastic cups that were the right size, so I got some cheap white bathroom cups and had some helpers adorn them with ribbon!  Now THAT is good help.  I don't have a great photo of the soup shots but you get the idea: 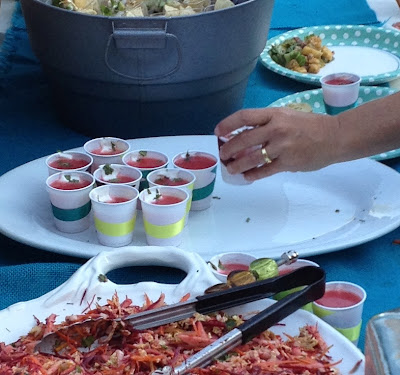 Onto the fun part... it's dessert time! 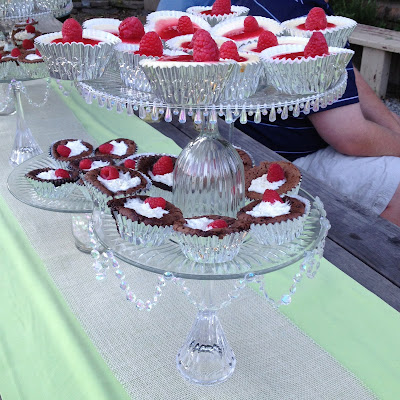 I baked the desserts the day before and had my son and cousin (they're both 14) add the sauce, whipped cream and/or berries right before the party.  Aren't they cute???

I made my flourless chocolate cake, but baked it in cupcake liners (paper and foil) for approximately 20 minutes.  We topped with some whipped cream and a raspberry.
I also made these mini-cheesecakes by Cooking Classy that I found on Pinterest topped with a raspberry sauce by Real Mom Kitchen.  I used lime instead of lemon in the raspberry sauce and it was just bursting with freshness... seriously, I had to lick the spoon.  (I also cooked all the raspberries, not half, and strained the seeds afterwards).
If you're lovin' the cake plates, check out this post!