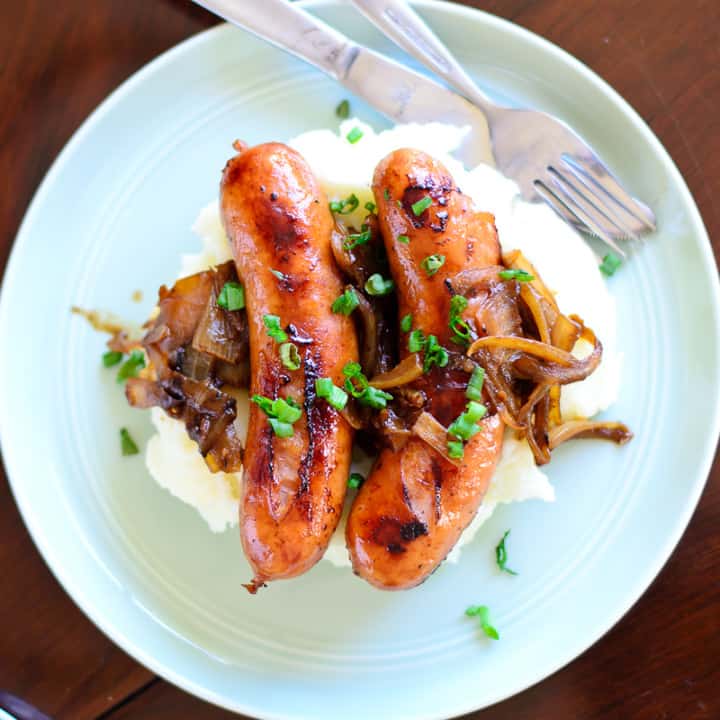 The delicious gluten-free dinner we think you need to try? Bangers and Mash. It's one of our favorites!

Guys. I had so many plans for my St. Paddy’s day posts. I was going to make soda bread, Irish apple cake with a creamy whiskey sauce, potatoes, and lots of gratuitously green things. I had these things all planned at weeks ago, so that I’d have everything ready to go in time for the big day.

But you know what they say about the best laid plans…

…they get destroyed by intense bouts of blogger burnout and writers’ block compounded by crappy photos that no amount of Photoshop can fix.

Wait, is that not the saying?

Just kidding! You know what I mean, though. The struggle is real, you guys. Which is why, on the day before St. Paddy’s day, I have only ONE recipe to share with you (vs. fifty million, as planned). It’s a good one though! [G-Free Foodie: same problem, which is why this article and recipe is being posted after St Patrick's day - but we didn't want you to miss out!]

Bangers and mash. Sounds super dirty, right? Probably because of movies like “Get Him to the Greek” – remember when Russell Brand’s character sings a song about his man parts with the lyrics “Will you come for my bangers…my beans and mash?” *wink*wink*

But as it turns out, in terms of food “bangers and mash” has nothing to do with…ya know. “Bangers” = sausages, and “mash” is…pretty self explanatory (mashed potatoes). Throw some gravy, fried onions, or baked beans on top, and you’ve got yourself a traditional British Isles pub dish.

Fun fact: according to Wikipedia, the term “bangers” originated because sausages used to be made with water (because of war rationing) and would explode under high heat if not cooked carefully. Modern sausages don’t do that, but the name stuck (it is kind of fun, I guess). So to reiterate: don’t shy away from bangers and mash the next time you see it on a menu, ‘cuz it’s just sausages and mashed potatoes with some gravy/onions/beans on top. And it’s super delicious. How can you go wrong with juicy, porky sausages + buttery mashed potatoes? Trick question – you can’t.

We pan-fried our sausages until they were brown/bursting, mashed our potatoes with plenty of butter and salt, and then ate them with caramelized onion gravy on top. Each bite was salty, creamy, pork-y perfection, and we stuffed ourselves silly.  It. Was. Awesome. 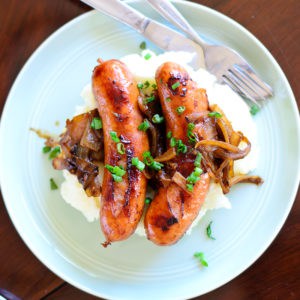 To make your mashed potatoes:

To make your sausages and gravy:

Article courtesy of Tina, Just Putzing Around the Kitchen